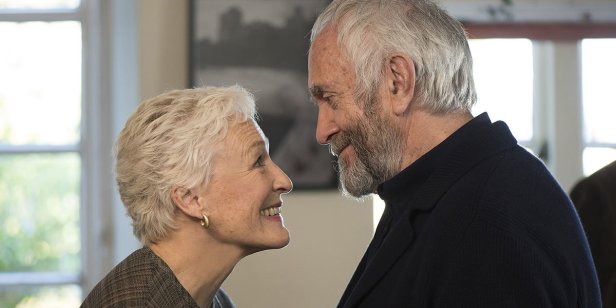 “Joe Castleman” (Jonathan Pryce) gets the call he’s been waiting for his whole life, the awards team calling to advise he has won the Nobel prize for literature for outstanding contribution to the written form.

With his dutiful wife of 40 years “Joan” (Glenn Close) at his side, he will travel to Stockholm to accept his prize, taking his moody wannabe writer son along for the ride.

The couple act like many older married couples do, they can’t live without each other each other but Joan has taken a supportive role whilst Joe’s talent burned brightly. They attend the many events planned for them, Joe is gracious, witty and charming and Joan the deferential wife.

The couple also have a daughter, about to give birth and bring further joy into the seemingly perfect family world many people strive to achieve.

All appears well on the surface and yet, and yet…..

The film moves briefly back to a time when the couple met, which plants the seeds for the later story. It will be obvious to most movie goers all is not well, the question is what metaphorical skeletons are buried, where and by whom?

Pryce is solid as always, totally believable in the part given to him, although he makes for an unlovable central character, deeply flawed and deliberately unlikeable in many ways.

Central to this almost two-hander is Glenn Close, again on Oscar nominated form, as a wife desperately attempting to not express any thoughts of her own, going through the required inanities on autopilot.

The apple-cart starts to wobble when the pair are approached by a journalist “Nathaniel Bone” (Christian Slater) seeking a story or an option to write the biography of Joe’s life. Nathaniel knows there are skeletons somewhere and even suspects what they are, he tries charm and then resorts to threats to break the story.

When the revelations come, they are handled believably with characters reacting as you might expect. The details leave a confused son (Max Irons) and a couple with much to lose if they choose to follow this new path.

The film is based on the the novel by Meg Wolitzer and would clearly make a good play, although the film makes efforts to open up the story with  location work.

This is a story likely to appeal more mature audiences who will know the stakes being played for, the inherent risks being undertaken and the price paid when secrets are allowed to lie dormant for too long.

A well acted intelligent film which resonates after the fact. In some ways not always likeable but arguably the point of the main character and his influence on the story.

I VOTED. YOUR TURN.