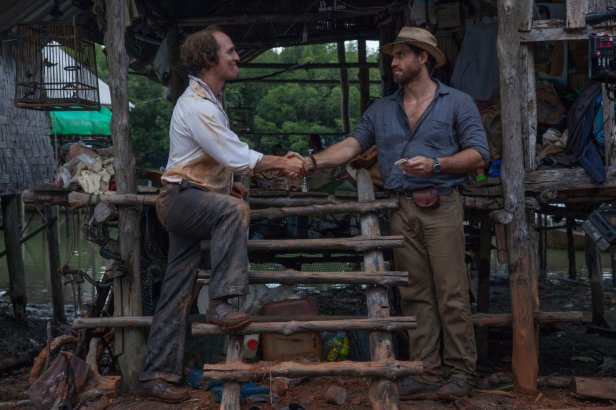 “Kenny Wells” Matthew McConaughey is a gold/mineral prospector, the son of a reasonably successful businessman, they have nice offices and create a respectable (ish) living.

Following an event, the business starts to ebb away, decisions are made, ethical standards start to slip away. Eventually, Wells is hard scrabbling a living out of bars and cars.

But Wells is nothing but resourceful in a desperate, trailer trash, ratlike way. He gambles everything on not red or black but gold, as the obsession begins to consume him. Meeting a successful “Gold whisperer” geologist “Michael Acosta” Edgar Ramírez he travels to remote Indonesia in search of fame and fortune.

Instead he finds disease and misfortune…

The story is not so much about if his luck changes (trailers will gladly tell you it does) but what happens after. Finding fame and fortune is the easy bit, keeping it is the hard part. There are man made jungles far more dangerous than those in Indonesia.

McConaughey is in full gonzo acting mode. Piling on the pounds and a god awful haircut, you can almost feel the sweat rolling off him. Bug eyed, roller coasting from the depths of despair to booze and wealth induced rampages the next. A truly committed performance in both senses of the word. Fortunately Ramirez is there to provide calm within the storm, with a solid gentler performance as a foil to all the craziness.

“Kay” Bryce Dallas Howard is the long suffering on/off girlfriend at home that Wells both treats well and badly in equal measure. Failing to see he has already found gold but is too stupid or arrogant to recognise her for what she really is.

The film is clearly largely filmed on location (Thailand standing in for other locations) and would have encountered many of the real issues the real expedition might have faced i.e. rain/mud etc. Yes, this is a true (ish) story with changed names for everyone involved, including the company for legal reasons. Details can be found here if interested Bre-X (post watching the film I would suggest)

The film is well made and certainly convincing but flawed due to the central character being thoroughly unlikeable, a chancer without charm or class. Would you trust him, no. Would you go have a drink with him, probably not, associate with him, unlikely.

Arguably the film concentrates too much on McConaughey’s performance, which overbalances everything else on screen. The tacked on Hollywood ending also begs the question, what about everyone else?

Worth a watch for the over the top performance from McConaughey and convincing location based shoot.

However you may be thinking, do I care about this man and what happens to him?