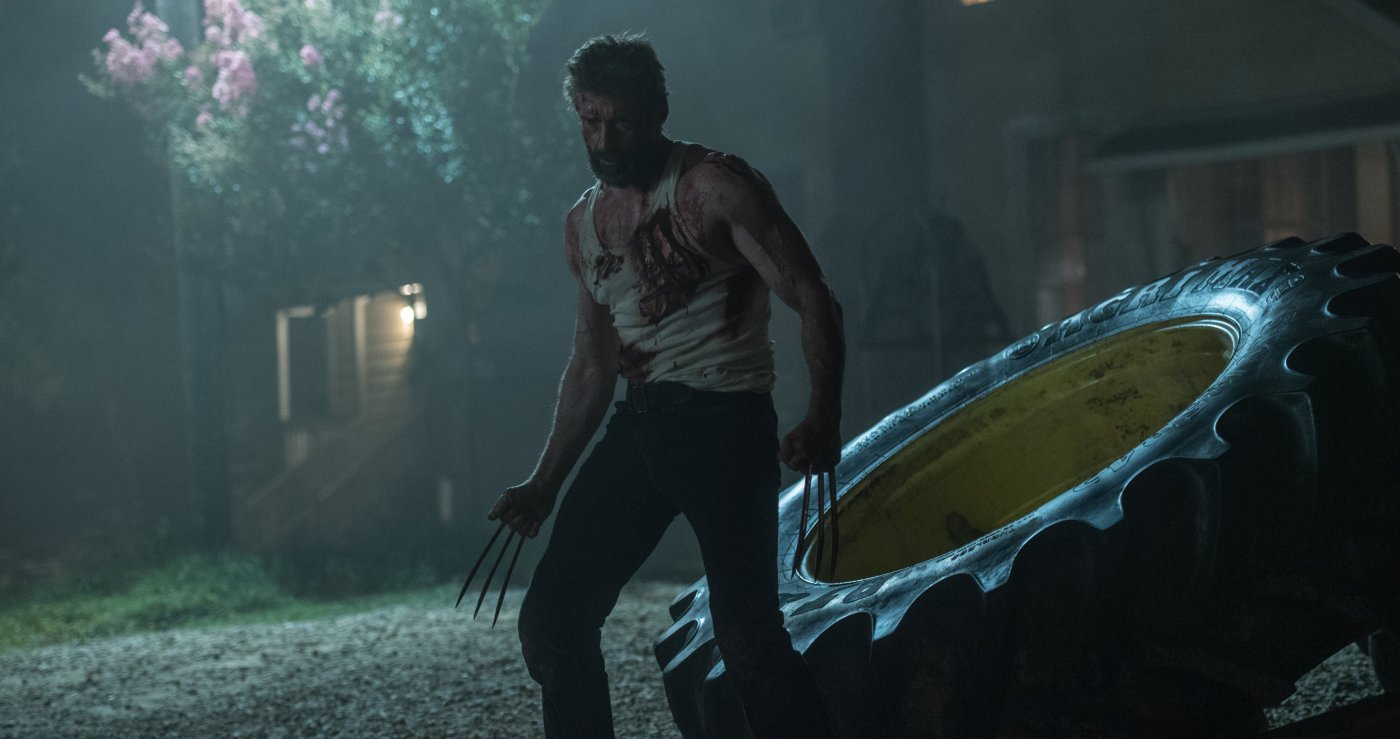 Not far into the future, a very weary and decidedly melancholic “Logan” (Hugh Jackman) is hard scrabbling a living as a Limo driver south of the Mexican border. On the quiet he is looking after an ailing “Charles Xavier” (Professor X) (Patrick Stewart), with the help of an albino tracker “Caliban” (Stephen Merchant).

This odd family exists in a post apocalyptic type setting, shielded by a large old water tank to prevent Charles from hurting anyone as his mind starts to deteriorate. That and some industrial strength pharmaceuticals.

When a young mutant comes onto the scene, the less than idyllic family group is shattered even further. Where did the child come from, who are her parents and just how many goons does a young girl have to slice and dice in one movie?

Putting the “D” in dysfunctional, the weird family group set out on a road trip to look for the “nirvana” that “Laura” (Dafne Keen) has been promised. Not only mutant but also mute for most of the film, the young actress makes up for lack of words with astounding acts of violence. Luckily Logan is babysitting, anyone else would not cope well.

The film effectively becomes a buddy movie, with hints of a father/daughter dynamic. Grumpy old grandpa “Xavier” sits in the back, chipping in inappropriately whenever he is not needed.

Of course we need a bad guy and in fact we get two or even three, all augmented by disposable goons, ready to be turned into kebabs at regular intervals. “Pierce” (Boyd Holbrook) fulfills this criteria, acting as the chief muscle for a more shadowy presence we meet later in the film (Richard E. Grant). Unexpectedly, we also get two Hugh Jackman’s for the price of one, during the bloody denouement.

The film stands out mainly due to the sadistic, brutal and glorified graphic violence which really has had no place in the series thus far. Unlike “Deadpool”, which mainly mines it’s gore for comic effect, this is brutal stuff indeed.

Dropping a star for this reason alone, which is a pity as there is actually a great film somewhere in the edit.

Jackman is committed to the role throughout, clearly he has been downing power-shakes for sometime and at least nudging some weights in the gym. He is almost out Wolverined by a co-star, half his size. Keen puts in an astonishing performance and the stunts and special effects deployed are absolutely state of the art. Stewart adds his usual gravitas, it’s almost worth the price of admission just to hear his voice.

However this is Jackman’s show and this is the swansong for the character, at least in this incarnation.

The final scene is touching which draws this specific X-Men story thread to a close, it’s a shame such a good film is marred (in this reviewers opinion) by such violent excess. Of course this sells and the film took $616m on a $97m budget, so what do I know?

An excellent film with some stunning action sequences, perhaps a fitting end for the Wolverine series but overwhelmingly and unnecessarily violent.

Be warned, unless you think Game of Thrones is just too tame, this may be too much for some.