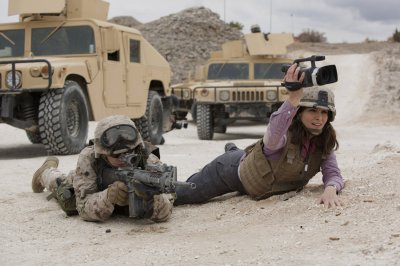 Whiskey Tango Foxtrot or “WTF” often used to circumvent censors, neatly encapsulates what this film is all about.

2003 – “Kim Baker” (Tina Fey) is a copywriter, working on boring articles, she kinda loves her boyfriend “Chris” (Josh) and works out at the gym on the cycling machine.

When the opportunity presents itself, Kim decides her life has can be neatly summarised by cycling for months on a machine that moves only two inches, she needs excitement, change and consequently danger, lots of danger.

Fortunately Afghanistan can provide that certain frisson she is searching for. Following a “corkscrew” landing to ward off Surface to Air Missiles (SAM’s) as the plane approaches Kabul, Kim is thrown headlong into a culture and atmosphere anyone new to the field of war journalism cannot possibly prepare for.

The hedonistic, live today you may die tomorrow is perfectly captured. Kim meets “Tanya Vanderpoel” (Margot Robbie), who calmly advises Kim might be considered a six or seven on the desirability scale in the US but definitely a nine in Afghanistan. Joking this would make Vanderpoel a fifteen using that measurement, she agrees without any sense of irony, before politely asking if she can shag Kim’s Kiwi security guard. Aussie/NZ men apparently being sexier, which is good to know as a male blogger living in NZ.

The film follows Kim as she interacts with her fixer Fahim Ahmadzai (Christopher Abbott) and the local US Marine commander “General Hollanek” (Billy Bob Thornton). Thornton proving yet again he can make any film better, just by turning up. “Ian MacKelpie” (Martin Freeman) a Scotsman abroad, is looking for stories and any vulnerable women he can peel from the herd, or is there more to him than meets the eye?

If you were expecting a comedic farce with pratfalls, jokes about the military and the situation in Afghanistan in 2003, this is the wrong film. The story is taken seriously and with some surprising restraint and intelligence. There are some amusing situations, Kim’s relationship with the local attorney general to be (Alfred Molina) is played light but with an underlying subtext of violence, arguably not dissimilar to the actual situation on the ground.

Freeman plays against type to some degree and does a fair job but this is Fey’s film and she is far better than we might have expected. The relationship with Kim’s fixer is deliberately underplayed and all the more touching and effective for the looks and emotions left unsaid.

Of course any film depicting the situation in Afghanistan as being chaotic, with everyone going slightly crazy, people dying or being maimed for no discernible reason, will fail miserably at the US box office. This film proving yet again that American audiences have no desire to see any semblance of military reality (i.e. messy), even with some added light comedy to make the medicine go down.

The film is based on the book “The Taliban Shuffle: Strange Days in Afghanistan and Pakistan” by Kim Barker about her real experiences in Afghanistan.

Far better than the FUBAR you might have been expecting and well worth seeking out.

Unlikely to appeal to mainstream audience but confirms two theories. Fey can act and films depicting recent “far eastern military engagements” as similar to Vietnam but with sand instead of jungle, are box office poison.