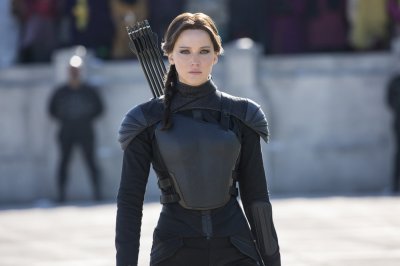 Following the necessary exposition and low action part 1, audiences will be looking for a barnstorming finish to this Young Adult (YA) trilogy, now split over four films.

All regular characters are back, as Katniss Everdeen a.k.a Mockingjay (Jennifer Lawrence) remains the nominal figurehead of the revolution. The story continues right out of the blocks, as the various districts join together to take the capital Panem and earn their freedom.

As a catch up, “Peeta” (Josh Hutcheson) although back on the “allies” side remains “damaged goods” after his torture at the hands of “President Snow” (Donald Sutherland), as bruises on Everdeen’s neck can attest. Peeta is a bundle of nervous tics & mutterings, his true allegiance less than certain.

A preliminary scuffle where a necessary target is laid to waste, provides Katniss with another opportunity to show her humanity and compassion. As always, the distinction between terrorist and freedom fighter is a grey area, lest the good guys become like the monsters they attempt to fight.

However the attack on the capital takes the majority of the running time. Thanks to the ingenuity of the game makers, every street and suburb is now a games arena. Where lethal pods are ready to be activated at any moment, unleashing a random assortment of devious media friendly horrors.

“The Hunger Games the Capital edition” if you will but stakes could not be higher.

Instead of being posted to the front lines Katniss is assigned “PR duty”, following well behind the fight, staging mini battles for the cameras.

The squad including Gale, Peeta and ever present camera crew but they should not be in any danger. Katniss is too important as a figurehead to risk, although whether alive or arguably more useful as a martyr to the cause, enters the equation.

As you would expect events do not go to plan and the squads options rapidly diminish, as do possible happy endings.

As always the film is anchored on Lawrence’s screen presence and she brings the goods yet again. This is a complex trilogy (split into four films) with very adult themes. Dismissing the story as a film about children killing each other, would be foolish indeed.

With so much story to get through, many of the characters get sidelined, Stanley Tucci gets only a few moments, Woody Harrelson little more but both make them count. It is poignant to see Hoffman in his final role, again making the most of his limited screen time.

Sutherland enjoys his role as Snow, arguably acting as a father figure to Katniss, however evil and misguided. Elizabeth Banks later festooned in elaborate outfits as usual, makes her moments count.

The film is long but feels less so, although those who missed the earlier films will miss the nuances to the story but thankfully the “Twilight ” inspired love triangle is much diminished on screen.

The film illustrates what lengths people will go to when grasping or holding positions of power and influence. Sadly all to relevant in today’s world, post attacks in Europe and elsewhere.

Not perfect but certainly a return to form after the scene setting part 1 and a solid send off for what will be one of cinemas more enduring strong female characters.

A fitting end to the story, whilst sombre in nature and with enough action to satisfy the target audience, the complex themes make this the most adult of the quadrilogy.

Not exactly “fun” but well worth your time and arguably asks the question “do the World’s odds really remain ever in our favour?”