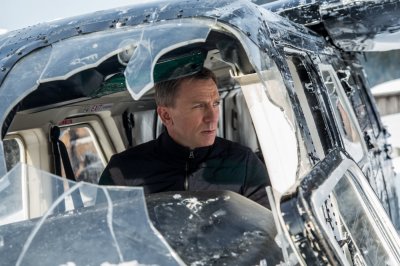 Following the huge success of “Casino Royale”, subsequent disappointment of “Quantum of Solace” and triumphant return of “Skyfall”, where does this new Bond outing sit within the 007 pantheon?

As the internet swirls with possible replacements, Daniel Craig is back wearing the tuxedo. Setting aside pointless “which Bond is best” arguments, Craig has proven initial doubters wrong, he makes a fine grittier, no nonsense Bond.

The film opens with an excellent sequence set in Mexico City during the “Day of The Dead” parade, one long take covers everything that personifies Bond. Seducing a paramour he neatly steps outside across rooftops, casually jumping across buildings before settling into a sniper position.

When all hell breaks loose we are treated to a thrilling helicopter sequence seguing into the usual credit crawl. As usual the sequence features silhouetted naked women but adding Bond covered in writhing black Octopuses, all set to a rather dud Sam Smith Bond theme.

When the dust settles, we return to a wintry London where the cold winds are blowing both within and without the Intelligence community halls of power. A new service has been commissioned to oversee the intelligence gathering tool, “Nine Eyes”. Loosely essaying the “Five Eyes” network that exists in real life.

The “00” branch is now considered an anachronism and “M” (Ralph Fiennes) and “Q” (Ben Whishaw) could soon be looking for new careers.  Pushing this new broom is “C” (Andrew Scott), a man more adept at manipulating spreadsheets than field stripping a Walther PPK.

Of course Bond was always about beautiful women, exotic destinations and gadgets, the latter being toned down in recent outings as the role became more grounded in reality. This episode takes in Mexico City, Rome, Austria, London and Tangier so locations are adequately covered whilst gadgets are edging back into the script

Apart from the alluring but unobtainable Moneypenny (Naomie Harris), Bond has two love interests “Lucia Sciarra” (Monica Bellucci) rather criminally underused in the screenplay and the younger “Madeline Swann” (Léa Seydoux), who like most modern “Bond Girls” can reassemble a pistol and carry off a stunning dress.

Craig has settled well into the role and makes for a thoroughly modern less misogynistic Bond but is let down by the principal villain. No less than Blofeld (Christoph Waltz) himself finally making an appearance, white cat lurking in the background. Waltz fails to make the most of his scenes, a boardroom sequence allows ample scenery chewing opportunities but he is left whispering into an underlings ear. He provides no more menace than your local dentist, Waltz arguably in danger of becoming a one trick pony with recent characterisations.

Dave Bautista as henchman #1 “Mr. Hinx” makes more of an impression albeit his introduction takes Bond films into more violent territory than usual. An enjoyable high speed chase in super-cars through Rome is fun but flirts with Fast and Furious type dynamics. Bonds DB9 made specially for the film looks gorgeous of course, a long way from his Mondeo in Casino Royale.

Finally we get to see Craig in the snow, although any ski-ing is conducted whilst remaining inside a light aircraft. “Q” gets some good lines and makes the most of them, Fiennes is solid but it would good to see a security home base not constantly in danger of disbandment for once.

Director Mendes adds further complexity to the role with the introduction of more family back-story which does deepen the character further. Whether this is necessary is debatable and adds to the already considerable running time.

Overall this is a good rather than great entry into the canon, all the pieces are in place but somehow the iconic nature of the character is somewhat lost. The film falling somewhere uncomfortably between Bourne and classic Bond, settling at number three out of four rebooted films.

Despite high expectations, if you enjoy Bond movies this remains well worth your time.

However with Mendes and Craig back on board and a decent villain to play against, we might have hoped for even more. If Craig can be tempted back, we may yet see another classic instalment before the tuxedo is passed on again.