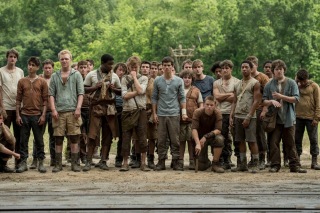 Following some impressive audio only effects swirling around the audience, we finally realise we are following a mine shaft lift slowly rising to the surface.

Together with essential supplies,”Thomas” (Dylan O’Brien) is being hauled to the surface. On arrival he is met by a group of teen boys, they help him out into a glade, he is bewildered, confused.

The leader and original arrival of the disparate group is “Gally” (Will Pouter). Realising the only way to survive is to stick together, allocate tasks and as best they can, all get along to get along.

No one knows why they are there, they have created shelter, they grow food and rely on the occasional supplies arriving with each new additional, confused  member of the group.

The elephant in the room or glade, is a giant maze that opens each morning and closes each night. Members of the group known as “runners” are dispatched each day to search for an exit. A task not made easier as the maze constantly evolves, changes and contains “grievers” ready to eviscerate anyone left out after dark.

Will “Thomas” accept his lot and grow vegetables or prove to be a disruptive force to the status quo?

The film raises important questions about the human spirit, the desire for knowledge and exploration, contrasting with those unwilling to rock the boat, accept what they have, taking a “could be worse” approach. Of course any YA orientated movie, is not going to dwell on such concepts for too long.

O’Brien makes for a solid attractive lead, ably supported by Poulter and “Newt” Thomas Brodie-Sangster. We are lacking the usual love triangle but these are early days yet.

The action sequences are exciting and well put together, with a good blend of live action and CGI, with some decent early scares. There are occasional lapses into melodrama and the film largely avoids any “Lord of the Flies” depth opportunities, arguably an opportunity missed but would admittedly dilute the overall story arc for this film at least.

This is well above average film-making with an interesting premise, representing a cut above the standard YA fare. With a worldwide take of $340 million on a $34m budget, a sequel is all but inevitable. As luck would have it, a further film is due out in late 2015, it will be interesting to see where this story takes the audience, as it follows the trilogy of books by James Dashner.

A good story with some solid acting from the young performers, some intense well choreographed action sequences make for an exciting movie.

There is plenty of scope for this world to continue and expand as the story deepens.