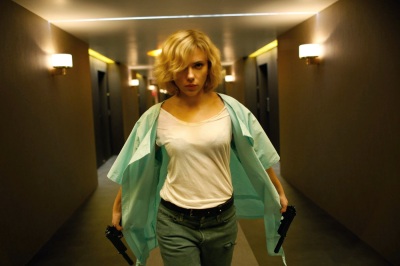 “Lucy” (Scarlett Johansson) is a good time girl with a month long loser boyfriend who radiates a “get the hell away from me asap” vibe, from the moment we meet him.

Located in Taipei, Lucy is soon completing an ill advised delivery of a metal attaché case handcuffed to her wrist. We are then introduced to stereotypical Asian ruthless gangsters headed by “Mr Jang” (Min-Sik Choi), who are straight out of central casting.

After the usual indication of ruthlessness and general rough and tumble, “Lucy” is dispatched with a few other unfortunates to distribute a new synthetic super recreational drug, unhelpfully sewn into her stomach.

Unfortunately, a portion of the drug seeps into her bloodstream and Lucy starts utilising more than the 10% of our brain function we all supposedly use. This naturally turns her into a super-assassin able to do, well just about everything, as her brainpower slowly increases.

The film is juxtaposed with Professor Norman (Morgan Freeman) luckily explaining the science bit to a crowded auditorium, thus providing the context for viewers wondering what on earth is going on. Preserve that “WTF” state in your mind, it will be needed later in the film.

No film with Morgan Freeman’s voice and Johansson’s obvious charms will ever be a complete disaster but to say the film is a disappointment and wasted opportunity is a massive understatement.

The film starts quite well, in a very formulaic, been here before way but rapidly becomes more incoherent before hitting the end sequence. At this point, one can only wonder if on set catering was tainted with the films synthetic drug, all semblance of story and reality go out the window.

There are highlights, a “real/simulated” car chase set in Paris is well done and the few “real” scenes are well choreographed. However, we have seen shoot-outs aplenty between ridiculous hordes of disposable henchman, we need to move on. One advantage is the film does does not outstay it’s welcome at 89 minutes, which by the closing moments you may be thankful for.

Freeman gets very little to do, Johansson gets few scenes without special effects to make a mark but still manages a creditable performance.

The blame for such a disjointed film must lay at the feet of Director/Writer Luc Besson, reportedly taking some ten years to pull the project together, time presumably spent on setting up logistics rather on the script or story. A film that ultimately is all style over substance, a criticism his earlier films easily avoided.

Despite a promising start, this futuristic thriller is the very definition of bonkers and can only be attributed as a self indulgent flight of fancy for director/writer Luc Besson.

Not recommended unless you are in for a very wild and ultimately pointless ride. However, with worldwide box office of $458m on a $40m budget, plenty of viewers are clearly willing to suspend disbelief and hop aboard.