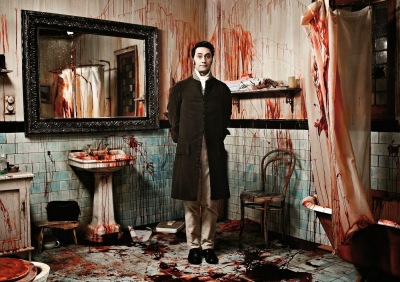 Viago (Taika Waititi) is the self appointed head of a household of immortal vampires situated in the city of Wellington, New Zealand.

Needing to feed on human blood the group lure innocents to the house before “releasing them”, to put it bluntly, killing them by biting their necks in time honoured fashion. Viago who is particularly house proud, likes to put down newspaper to avoid any unnecessary mess, although hitting a main artery is always a risk. His motto might be, “just because we kill people doesn’t mean there needs be mess”.

The “film crew” follows the group as they carry out their daily tasks, squabbling and flying about the house, feeding “Petyr” raw chickens in the basement and avoiding sunlight at all costs. They go out at night cruising the pumping Wellington night club scene but only if they are invited in, this does not happen often.

Occasionally they meet their nemesis, Werewolves. “Anton” (Rhys Dharby) is the alpha male, with a small “A”, constantly reminding his gang they are werewolves not “swearwolves”. Hackles are raised, fur flies, threats are made, then everyone returns home to finish the washing up.

The film is short at only 82 minutes and is filmed in a loose mockumentary style, played very much for laughs and meanders through a very slight plot. It is obvious the cast are having fun but this feels like a fun short extended well beyond the central premise, leaving the story nowhere to go.

There are amusing scenes, a comprehensive safety inspection from the local police shows just how far investigative police work has come but for every interesting sequence there is one that might have been left on the cutting room floor, who knew Vampire’s can’t eat chips?

Werewolves, vampires and a ghost living haphazardly together, is a story well told in the BBC series “Being Human”, which managed to combine great acting, humour, mild horror and drama effectively. Whilst a single film has no hope of competing with a lengthy series, we might have expected more from Clement and Waititi, both very talented performers/writers.

If you really must watch a film featuring hapless vampires, messing about, doing chores and squabbling over fresh kills in an urban New Zealand setting, this is the one to watch.