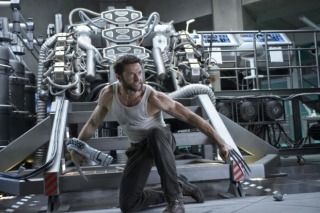 As the comic book cinematic universes continue to expand it is difficult to keep up. Whether a film is a sequel, prequel, reboot, parallel story or a hybrid of what has come before, is almost mind boggling.

As the most successful character of the X-Men series, it always made financial sense for the man with the steel claws as “Logan” or “Wolverine” (Hugh Jackman), to keep coming back for more.

This time we are transported back to just before the atomic bomb is dropped in Nagasaki 1945. Japanese officer “Yashida” (Ken Yamamura) instead of committing ritual suicide (Sepukku) along with his colleagues, opens all of the American prisoners cell doors, giving them a doomed opportunity to escape.

Deciding he is worth saving, Logan persuades his captor to dive into a pit and then shields him from the conflagration, using his indestructible body.

Fast forward to the present day and we find a troubled Logan waking post nightmare in bed with “Jean Grey” (Famke Janssen), all is not what it seems and suddenly we find the bedraggled Logan in the Yukon. With echoes of “Jean Valjean” from “Les Miz” still haunting Jackman in this mode of dress, you will be pleased to hear singing is not on the menu.

Logan is an angry man and soon finds an opportunity for a bar room fight, when local hunters treat their prey with no respect. Before he can do his thing, he meets “Yukio” (Rila Fukushima) a young red headed Japanese woman brandishing a Samuari sword known as the “Seperator” for obvious reasons.

Before you can say, neatly choreographed fight scene in local ale house, we are whisked off to Japan. The man he saved many years ago, “Yashida” wants to say goodbye. Of course there is an ulterior motive involving robbing Wolverine of his regenerative powers to save the older man thus allowing Logan to finally become mortal.

The plot thickens when the beautiful daughter “Mariko” (Tao Okamoto) appears on the scene and clearly needs Logans help, all is not well in the state of Denmark, or in this case, Tokyo.

The film attempts to broaden and deepen the role but does overall feel like a nod to current movie demographics, setting itself in Asia. The story as it unfolds, is unnecessarily complicated and towards the conclusion, teeters dangerously towards “Transformers” type territory with unintentional comedic moments.

The CGI especially towards the denouement is a bit ropey and what with Yakuza, lots of disposable henchmen dressed in black and sets that look, just like sets, the strive for realism takes a hit.

Jackman is as solid as ever, muscles popping and rippling like Mr Universe with Swiss army knives for hands. The supporting cast are just that, supporting and add little to the story or characterisations. At least this time we get Wolverine centre stage throughout the film with only minimal extra mutants popping up.

The prologue is perhaps the most interesting segment of the film but like X-Men before, some might question the use of this thematic element as a backdrop in a mainstream comic book film.

Not a bad film but not a great one either. Wolverine is still searching for that one good solo film he surely deserves.