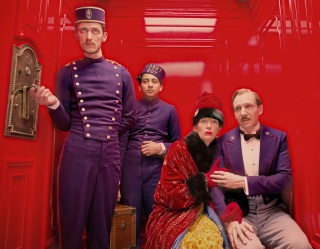 Director Wes Anderson makes films on his terms, it is unlikely he gets many “notes” from the studio making suggestions and changes. If they were watching closely, they would probably just shut production down.

How Anderson manages to get these projects financially across the line and with the “A-List” talent on-board is not our concern. The films exist and it is up to the audience to decide if this is a good or bad thing.

Anderson’s films are an acquired taste and “The Grand Budapest Hotel” is no exception.

We enter a highly stylized world where the story, loosely inspired by Stefan Zweig is largely told in flashback.

We first meet the “Older writer” (Tom Wilkinson) who has written the book on “The Grand Budapest Hotel”, he recounts his recollections in-between distractions provided by his grandson.

We then move to Young(er) Writer (Jude Law) and Mr Moustafa (F Murray Abraham) quietly eating lunch in the now severely down at heel 1960’s set hotel, as the 1932 story then unfolds in extended flashbacks. Resembling Russian Babushka dolls in complexity, it feels easier to watch than explain in a review.

The Grand Budapest hotel exists in a fictional European country, the hotel is luxurious and the clientèle are beautiful, wealthy and if female, usually regularly serviced, in every sense of the word by the fastidious concierge “Gustave H” (Ralph Fiennes). Most notably Madame D (Tilda Swinton) who simply cannot live without Gustave and senses impending doom.

The hotel is run at the whim and command of Gustave, who also has an easy way with providing favours and receiving them in return. The new “Lobby Boy” aka “Zero” (Tony Revolori) requires training and this provides an opportunity for the audience to experience Gustave’s quirks, mannerisms and mode d’emploi.

Over time and under his close supervision, the “Lobby Boy” becomes an integral part of the hotel service team, at once visible when required and invisible when not. The world is good until bad news is received and Gustave and Zero are required to take a train ride to attend a will reading led by the executor “Deputy Kovacs” (Jeff Goldblum).

Gustave has known that war is likely in the region and the pair are stopped by Inspector Henckels (Edward Norton) part of the “ZZ” security forces. These troops allude to a Nazi like oppression but this frames the story rather than becomes an integral part. On this occasion Gustave’s connections allows them safe passage but we will meet this inspector again later.

Once the will is read, this provides the movies “Macguffin” to allow the rather bizarre plot to unfold as a rare and very valuable “Boy with Apple” renaissance painting, is acquired, hidden, lost, searched for etc.

We also get time, just, to squeeze in a romance between “Zero” and local artisan patisserie baker (Saoirise Ronan), someone who becomes integral to the plot as it progresses.

The film is highly stylized in the usual Anderson manner, real yet unreal and with characters acting with poker faces throughout, however crazy and comedic the situations. Digging colossal tunnels with tiny spoons and hammers, with no attempt at realism. With the usual mixture of detailed sets, deliberately shoddy effects on occasion (hand drawn cable cars) and occasional macabre details this is known territory for fans of the directors movies. There is also a fair dollop of “F” Bomb’s, occasionally in unexpected places. Whether the occasional violent dip and language adds to the film is debatable.

Fienne’s excels in his role “Take your hands off my Lobby Boy” is a T-Shirt slogan waiting to happen. All the cast acquit themselves well, some in almost cameos yet clearly keen to work for Anderson for salary scale (otherwise the film would not get made). Wilkinson, F Murray Abraham add gravitas, Defoe is as usual bonkers and the young lovers add a sweet centre to the story.

Think “Amelie” or Anderson’s own “Moonrise Kingdon” but without any happy endings and with darker situations.

The film may represent a Marmite movie event, you will love it or hate it. For those that stick around and enjoy this form of intellectual silliness, there is much to enjoy here.