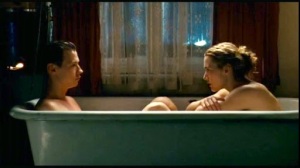 Berlin 1958 a 15 year old boy (Kross) suffering from Scarlet fever, collapses in the street and is briefly cared for by a 30 something lady in a rare display of kindness.

The young boy recovers and returns to thank his benefactor, he is quickly seduced and falls into a passionate brief summer affair with a much older woman, shunning obvious interest from girls his own age.

The affair is not all about sex, Hanna also likes to be read to and slowly their relationship expands to bring this to the fore. Michael is clearly in love, although Hanna is no longer capable of such real emotions. At one point coldly stating Michael does not have the power to upset her, he means so little to her.

So begins Stephen Daldrys multi Oscar nominated period piece with Kate Winslet on top form (and winning the Oscar), as usual seemingly able to immerse herself into whatever character and period is required. Some might argue Winslet was more deserving for “Revolutionary Road” but Oscar does what Oscar does.

This is a complex film, with many time period leaps both backwards and forwards. I must confess to finishing the movie believing the affair occurred prior to the tragic events not post, which on reviewing the dates on the screen is clearly not the case.

Michael is a good German boy from a strict family, suddenly thrown in at the emotional deep end. Ill prepared for his good fortune and subsequent loss, it has a profound affect on him. Ralph Fiennes playing the older less care free Michael, becomes a lawyer. He remains cool and distant despite caring for his now adult daughter following the failure of his subsequent marriage.

Based on the acclaimed book by Bernard Schlink this is a thoughtful film full of sadness, remorse and demonstrates how we are all bound by the choices we make.

Hanna Schmitz (Winslet) is a lost soul, repressed but functioning efficiently according to strict Germanic rules, working as a conductress on the trams. That is until she is promoted to the office, this cannot happen, her secret will be discovered, she can neither read nor write. She will discover later just how high a price she will have to pay for this petty vanity, a strange choice bearing in mind the alternative admission of guilt.

Following the publishing of a survivor’s memoirs, a trial is held for several female SS guards, accused of overseeing the murder of 300 Jews, burned to death inside a locked church during a death march to another camp.

Michael of course knows none of this but gradually discovers the truth when he attends the war crimes trial as a Law student. He recognises the accused, the guard liked to choose doomed inmates and make them read to her.

“We were responsible for them” Hannah simply states, “what would you have done” she asks of the presiding judge. To let the prisoners out would have caused chaos, far better they were tidy and in control, no matter that they died in the inferno.

Hannah is not shown as bad or evil, merely a small cog in the much larger machinery of death. No malevolence or apparent hatred is evident, just practicalities. More inmates arrive therefore some must be sent to Auschwitz to make room, practical Germanic efficiency, nothing more. All the more shocking for the lack of emotion or subsequent comprehension shown.

Law Student Michael in a bid to understand, tours Auschwitz. Silently he slowly walks past rack upon rack of shoes, “shower” blocks and furnaces. Following this quiet, chilling and effective scene, he makes a decision that will have a profound impact on both his and Hanna’s life, joining them irrevocably together.

There are times where the film feels a little too earnest and appears constructed with Oscar and awards in mind, rather than attracting red carpet attention by the quality of the film alone. Occasionally difficult to follow the timeline and one wonders why the older Michael takes so long to make the revelations he does. After all, he did nothing wrong, he was even too young to have failed to notice what many could see and collectively chose to do nothing.

Thoroughly deserving of an Oscar (if perhaps not for this role) Winslet is believeable in a difficult and in every way, revealing role, ably supported by Kross in the films stronger earlier scenes.

Tension and direction does dissipate in later scenes following the trial verdict but there is still much to admire. There are no easy answers to be found here, only grey morality, practicalities and lives lived in the shadow of events the characters struggle to comprehend let alone explain.

Too long and not quite as good as it might have been but a thought provoking and morally ambiguous film, that partly due to the subject matter, deserves to find a larger audience.