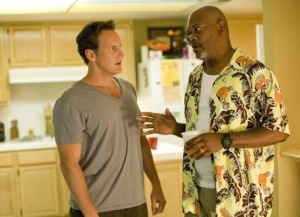 “Do you think they’ll let us use their pool?”

Abel is the 28 years on the force, tough widowed street cop next door who’s a strict disciplinarian with his kids. The LAPD motto, “Protect and serve”, extends to a little neighbourhood watch at night, whether the locals like it or not.

What’s safer than living next door to a cop?

It’s tough on the streets and Turner is up to the task, dispensing justice and a little rough counseling session, using the muzzle of a shotgun. Provided his snitches come up with the information, he leaves them to their criminal ways. Is he a bad cop or just an officer doing what it takes in the urban jungle? Clearly Internal Affairs have an opinion.

It is not long before Abel’s views on interracial marriage, and his general attitude on just about everything, bubbles to the surface. Notably at a house warming party, which provides more awkward pauses than a stripper at a church garden party. There are scenes where maybe something is being said about the racial divide, particularly with the rich father in-law but this is not the movie for such themes to be explored too deeply.

Starting with a night time naked pool “synchronised swimming” session, witnessed eagerly by next doors kids (and eventually Turner himself), events start to escalate. Moving from annoying security lights, aircon vandalism to chainsaw fights over the fence. There is a palpable sense of dread as issues start to escalate out of control, although again the catalyst for the final showdown seems improbable with what has gone before.

Clearly Officer Turner has some unresolved issues and the plot moves quickly into standard terrorising mode, with the twist that Turner is the law, so who are you going to call?

Jackson of course deals with perp’s better than anyone on the screen and has a nice line in menacing one moment and appearing wholly plausible the next. The interplay between the newlyweds is realistic and the relationship angst is a welcome addition to a generally formulaic thriller.

The opening exchanges between Chris (Wilson) are somewhat unrealistic but once these are out of the way, we start moving more into more familiar “movie” territory where anything is possible. The movie staple of a missing phone and it’s weighted importance is played well and adds real impetus to the closing scenes.

Somewhat implausible opening exchanges and with the mental disintegration seemingly occurring of screen, this is still an affective modern thriller with a strong ending, set against an urban LA bush fire.

Jackson is effective as ever and Wilson portrays the standard movie everyman without resorting to a wimpy stereotype.

Well worth a look, as long as you accept that officer Turner needs a few hours of counseling himself which is later partially explained but would he really go that unnoticed in a “post King” LAPD – lets hope not.