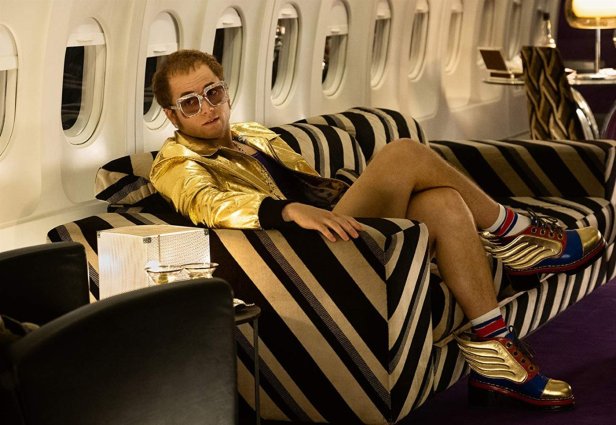 As a film director how are you going to make a movie about Elton John’s life, a straight biopic in every sense, is a no go.

Maybe the answer is to go a bit crazy and throw in fantastical elements, dance numbers and generally mix it up?

Starting with Elton John (Taron Egerton) dressed for work i.e. in a devil costume with massive wings, striding into his first therapy session admitting “I’m an alcoholic, cocaine addict, sex addict and a bulimic. Also a shopaholic and have problems with weed, prescription drugs and anger management”.

This therapy session provides a very loose framework to tell Elton’s story, or at least a version of it, from a young lad to superstardom.

Early scenes depict his home life with his air-force father (Steven Mackintosh) incapable of showing him affection and his disinterested mother (Bryce Dallas Howard). Leaving only his grandmother (Gemma Jones) to encourage his undoubted musical talent.

With an ear for a tune, when attending a musical scholarship he can play a complex tune only to the point where the teacher stopped, he had never played it before so stopped where she ended.

The early scenes are played by younger versions (Matthew Illesley & Kit Connor respectively) until we reach “Saturday night’s alright for fighting” where Egerton takes over.

The film mixes dance and fantastical elements in a similar way to Baz Luhrman’s “Moulin Rouge” but does not detract from the central story and works well.

Elton John’s rise to rock superstardom contained most of the stereotypical elements, drugs, alcohol, sex, money and cynical managers. John’s sexuality being a large part of who he is, is illustrated as far as the rating allows and becomes part of the film without becoming the central premise.

The relationship with his song writing partner Bernie Taupin (Jamie Bell) is well sketched, Bell is a talented actor and proves it here with another very different role.

Egerton gets good support from Richard Madden as John’s manager/lover and Stephen Graham as his first manager, who gets some great lines.

This is a fun movie to watch but in retrospect were we complicit in enabling this much unhappiness by enjoying his music? Someone with the world at their feet and yet bitterly unhappy and on occasion suicidal, wearing a clown face but crying on the inside.

Egerton does a fine job in the central role and adds his own voice to most of the soundtrack. Like Rami Malek in Bohemian Rhapsody, this is not a role for the fainthearted. You are all in or go home and Egerton has chosen the former, making good friends with Elton John in real life, who supported the film.

There will be complaints about chronology with events moved around, compressed or omitted to suit the story but that’s film making. Attempting to condense this large life into two hours is impossible.

One interesting statistic, Elton John has helped raise over $400 million for charitable causes he supports. Not many people can put that on their resume.

A fun two hour romp through Elton John’s life up to the point where he got clean and starting enjoying the life he really wanted to live.