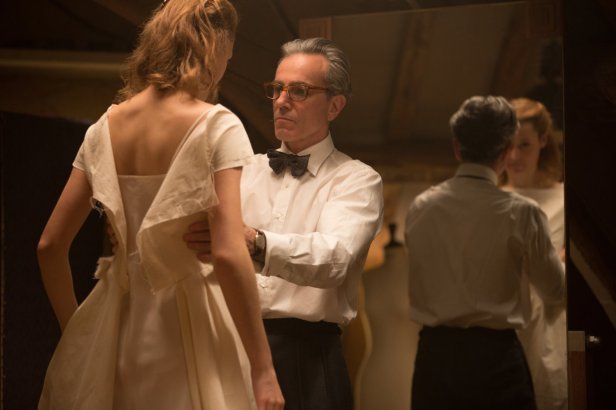 A languid adult film making no concessions to you understanding what’s really going on. One is either entranced without knowing why, or reconsidering why you picked the wrong film with “Phantom” in the title.

“Reynolds Woodcock” (Daniel Day-Lewis) is a high end renowned dressmaker for the rich and famous in post war London. Together with his austere sister “Cyril” (Lesley Manville), he creates and fusses over designs, always minutes way from a diva tantrum at the slightest annoyance or perceived distraction.

Girlfriends come and go, diplomatically turned away by Cyril if they crunch their toast too loudly in the morning or Reynold’s tires of them for some other minor infraction.

Traveling to his country home, he encounters a young woman in a local cafe who takes his breakfast order, an everyday scenario that is strangely sensuous and beautifully directed and filmed, loaded with subtext and meaning.

Encountering this obviously wealthy, worldly and cultured man in such an out of the way place, “Alma” (Vicky Krieps) is immediately entranced, a feeling immediately reciprocated by Reynolds.

What follows is initially borderline creepy, would a young woman in 2018 really just go along with the requests that follow and not run for the hills? But, this is a film and not real life and set in arguably a simpler more trusting time.

Before long, Alma is swept into Reynolds world of beautiful gowns, acting like a living mannequin upon which he drapes his fantastic creations.  It is obvious Alma will have an impact but how much and for how long, is part of the film’s charm.

Lewis has threatened this will be his last performance, which would be a shame but represents a great example to leave as his legacy. As usual he is totally believable in the role, taking a risk with a character that is largely unlikeable.

Krieps a relative newcomer, must have faced a daunting challenge going toe to toe with Lewis but acquits herself remarkably well. The film revolves around Alma’s and Reynold’s relationship, which becomes ever more layered as the film progresses. Just when you think the film may go one way, it takes a very different and unexpected tack.

The quality and feel of the clothes, the house and lifestyle is beautifully evoked, no doubt with a considerable production budget allocated to create this cinematic illusion.

An unexpectedly compelling film which leaves you wondering, “why am I watching this film where nothing much happens?”. However, in reality the story is incredibly complex, as the characters influence and power ebbs and flows throughout the narrative.

A film that inexorably draws you in with excellent performances from Lewis and Krieps, ably assisted by a steely turn from Manville.

Recommended, despite just being about fancy frocks on the surface….