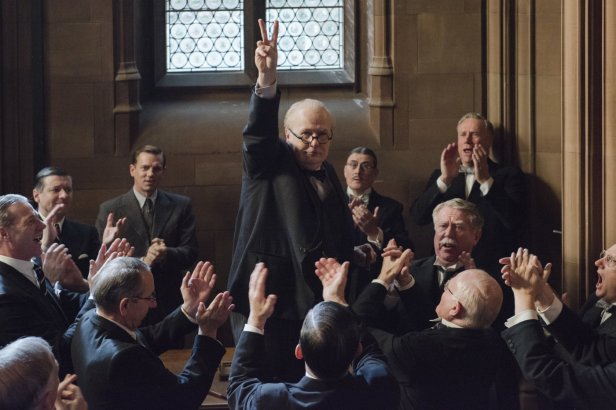 If you are going to make a movie about Winston Churchill you better make a good one, there is probably no more iconic figure in modern British history.

Director Joe Wright has already flirted with the Dunkirk retreat in his previous movie Atonement and must surely be aware of Christopher Nolan and his recent epic Dunkirk.

Wright therefore wisely dives right in by concentrating almost exclusively on the man of the hour and pivotal character during these events, Winston Churchill himself.

There have been fine performances by many actors before, Albert Finney and Robert Hardy to name a couple. Gary Oldman would probably not be top of the list to physically portray this well known figurehead and yet, with the help of ace make up artist David Malinowski , he becomes Churchill. The prosthetic additions are not noticeable and Oldman is almost unrecognizable.

This is just as well, as Oldman features in almost every scene and the film lives or dies on his performance. Luckily, this is arguably best of his illustrious career so far and rightly won him a best actor Oscar. He is ably supported by Kristin Scott Thomas as his long suffering but clearly devoted screen wife “Clemmie” and Ben Mendelsohn holding his own during occasionally amusing, yet touching scenes as King George VI.

It is fortunate to have those two class actors around, as Oldman sucks all available air out of the room, leaving little space for others. Whether in full on swagger mode “Don’t interrupt me when I am in the middle of interrupting you” or in Churchill’s periods of self doubt, which are extensively documented in the history books.

Lily James tries valiantly to move away from her Downton Abbey “Rose” persona, which is difficult when those around you are chewing every bit of scenery close to them.

As is well known, Churchill suffered from depression or the “Black Dog” as he referred to the condition. He certainly had plenty to be worried about, with the weak previous Prime Minister Neville Chamberlain (Ronald Pickup) giving him the worst hospital pass ever.

Germany advancing on all fronts in Europe, France ready to capitulate and the entire British Army trapped at Dunkirk, a sitting duck to German aerial superiority. To add to the mix, Churchill was at the mercy of petty squabbling in his own party, with Chamberlain and Viscount Halifax (Stephen Dillane) attempting to outmaneuver his every move.

The use of actual locations including the War Rooms in London, together with Parliament shots, adds to the authenticity and the period detail is well done.

There is a minor misstep with an unscheduled trip on the underground, arguably necessary to provide the reasoning behind Churchill’s sudden steely resolve. However, this scene feels tacked on, bit cheesy and somewhat unreal, as it almost certainly was.

However, the film illustrates just how close Hitler came to achieving his goals and how history can turn on the smallest of actions, conversations or relationships. A fact that remains as true now as it ever was.

An excellent film with a consummate scene stealing performance from Oldman, rightly rewarded at Oscar time.