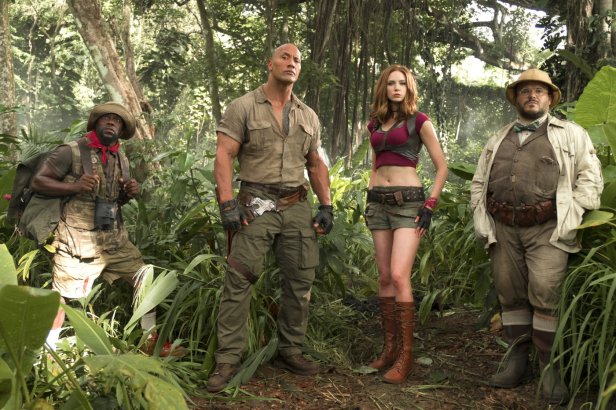 Jumani was a huge success back in 1996, one of the first films to extensively use CGI to depict animals running amok in an urban setting. Fondly remembered, arguably even more so following star Robin Williams passing.

One could argue this was a sequel no one was crying out for, destined to be a crass cash grab. However Chris McKenna & Erik Sommers obviously cared enough to put some thought into the screenplay.

In quick order, the anachronistic original board game is updated to a video game and with that anomaly easily written away, we are introduced to our young cast. Geeky “Young Spencer” (Alex Wolff), “Young Fridge” (Ser’Darius Blain) a football jock but poor at homework, self obsessed social media queen “Young Bethany” (Madison Iseman) and finally, slightly left field outcast “Young Martha” (Morgan Turner).

This eclectic group get thrown together for detention and to prevent boredom, decide to play Jumanji, big mistake.

Before you can say “Game Over”, all four kids are sucked into the game before being unceremoniously dumped into a “jungle”, with Hawaii neatly providing the real life filming location.

Young Spencer becomes Dwayne Johnson, muscle bound and brave as a lion, although he doesn’t know it yet. Young Martha turns into Karen Gillan, a kick boxing dance “hottie”, whilst the “Fridge” becomes more of a mini cool box, in the shape of Kevin Hart, resident zoologist and motor mouth.

Most amusing of all is “Bethany”, transformed into middle aged male cartographer Jack Black, clearly having the time of his life.  Acting as a woman in a man’s body with all the attendant lifestyle changes this brings, played with affection and sensitivity even when it comes to the obligatory willy jokes.

The team are met by a NPC (non playing character) “Nigel” (Rhys Darby) who handily explains the rules and keeps doing so in repetition until the players move on. The film also handles “player lives” in a neat trick, which also adds an element of real danger to the proceedings.

Overall this is great family fun, the “Rock” is as usual, more than happy to laugh at himself and the cast are clearly enjoying the chemistry they generate together. The humour is light and breezy, effects are state of the art and director Jake Kasdan keeps the tone exactly right.

Bobby Cannavale pops up as the villain, doing his best with a limited role and Nick Jonas plays a character stuck in the game who helps the group later in the movie.

As one of the main obstacles the team have to encounter, the use of people on motorbikes firing rockets/guns etc does seem somewhat incongruous. But we are in a movie depicting characters lost inside a video game, so who are we to quibble.

The ending might suggest this is a one off but with a box office take of $959M worldwide, there might be another gaming console lying around somewhere in 2019.

Great fun and far better than you might expect, a rollicking adventure which also manages to sneak in some worthwhile life lessons whilst nobody is watching.

One thought on “Jumanji: Welcome To The Jungle ****”