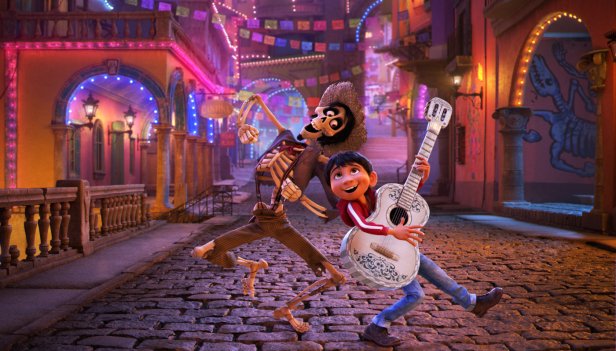 Imagine the pitch, “Ok, we have this kids movie, it’s all about death, specifically the Mexican Day of The Dead (Día de Muertos) and did we mention there are lots of dead people?…..”.

Somehow Pixar has managed to find a child friendly story from what appears to be a bit of a downer.

Unfortunately, his extended family are not so keen on him pursuing the life of a musician. The family business is making shoes, Miguel should follow that tradition.

A dislike of musicians is well founded, long, long ago the patriarch of the family left to fulfill his musical fortune and never returned. Music is banned and consequently Miguel practices quietly in his bedroom, watching well worn “De La Cruz” videos.

With Día de Muertos rapidly approaching, this provides the family with a chance to celebrate those who have passed by remembering them with photographs and candles. An opportunity for families to be together again, if only in spirit.

Miguel however has other plans, he wants to enter a talent show but suddenly needs a new guitar, where could he find one?

Most of the film is set within the world of the dead. Skeletons albeit kid friendly and dressed to not terrify the tiny tots. Heads and limbs come loose at regular intervals but it is all played for fun, that is until someone loses an eye, or two.

As expected, the animation is state of the art and like most Pixar films, is blessed with an intelligent and affecting story. Directors Lee Unkrich & Adrian Molina ultimately sending youngsters happily to sleep, with a “family is everything” message.

There are some fantastic touches, when Miguel first sings and plays the guitar is quite magical, with newcomer Gonzales doing a great job of not being too cutesy. As characters pass to the final unknown, this is sensitively and beautifully animated.

The story rips along, not following the usual A, B, C logic of some animated films and it’s good to see risks have been taken with the screenplay.

The film does skew younger, so parents are slightly short changed and over time skeletons falling apart and back together gets a bit old. Possibly the running time could be trimmed slightly to reduce a feeling of repetition.

However, the team wrap up the tale with a heartwarming coda. Whilst not assailing the emotional multiple hanky high points of “Toy Story 3”, “Up” or “Inside Out”, it will create a few sniffles for those paying attention.

Winning the Oscar for best animated film confirms this is no slouch and whilst not the absolute best Pixar output, this represents solid, high quality family entertainment.

Pixar have managed to carve out an excellent family film which encompasses love, family and yes death, all in an impressive package for the under 10’s.

Great family entertainment kids will love, leaving slightly less for parents perhaps but still with a solid 100 minutes of peace and quiet