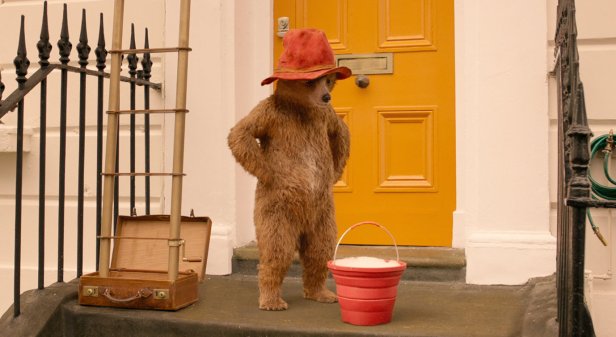 The original “Paddington” film surprised everyone. Turning in a perfect family film whilst generating great box office ($237M). All the while sneaking in a sweet underlying message with great performances from real life actors and voice talent.

“Paddington” (Ben Whishaw – voice) is firmly ensconced in the Brown household as a much loved member of the family. He also brightens up the street with his positive attitude, helping people where he can and generally making peoples day better.

Unfortunately the book costs rather a lot of money, something a young bear in London may be short of post Brexit, therefore Paddington sets out to find work. His attempt to find a chosen profession hits the occasional snag, which may come back to haunt him later in the film.

Due to “unforeseen circumstances”, Paddington later ends up “in the nick”. The reason for this grave miscarriage of justice, leads us to another new central character, “Phoenix Buchannan” (Hugh Grant).

Buchannan is an older washed up actor desperately searching for a return to the spotlight – (Grant may want to re-evaluate his agent at this point). However, using a variety of silly disguises he manages to fool everyone (but not the audience) and provides ample opportunity for Grant to ham it up and pantomime every gesture and action.

The Brown family are more sidelined in this episode but Sally Hawkins, Hugh Bonneville and Julie Walters get some decent scenes, still clearly enjoying themselves. Paddington gets centre stage this time out, creating friendships in the most unlikely places with the most desperate of villains “Knuckles McGinty” (Brendan Gleeson).

As before, the film is skewed towards a younger viewer who will enjoy every pratfall and the bright primary colours. But there is plenty for adults to enjoy and again the film underpins a more hopeful message, much needed in our cynical times.

All the cast are having a blast and Whishaw, a late replacement for Colin Firth who believed his voice was too old, is the perfect choice. Incidentally, the creator of Paddington Michael Bond died in June 2017 but not before the first film captured a brief cameo.

Director and co-writer Paul King  has managed the impossible, making the film as good if not better than the original. King also throws in a few additional scenes, a pop-up book coming to life, a cell block turning into a jungle, indicative of the care and love the creators have taken with a “children’s film”

As Paddington says, “If we’re kind and polite the world will be right”, not a bad message to takeaway when the credits roll.

Perfect family entertainment and once Paddington 3 arrives, as it surely must, a great box set to keep the kids entertained, educated and morally enlightened.