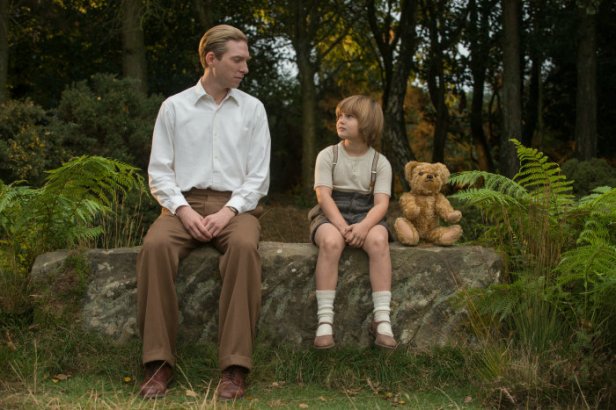 “Winnie the Pooh”, together with “Piglet”, “Eeyore”, “Rabbit” and “Tigger” are some of the world’s most famous characters, known to millions of children throughout the globe.

A.A. Milne, the creator of the characters, based the stories on his young son’s favourite toys and a simple game of “Pooh Sticks”. The stories were beautifully brought to life with simple pencil line drawings by E.H. Shepard, inspiring many film and soft toy recreations through the years.

The film attempts to explain the inspiration behind the story and sketches the personal cost on the family, especially Billy Moon, the real “Christopher Robin”.

Returning from the first World War, a much changed man with signs of PTSD (before there was such a diagnosis), Alan Milne (Domhnall Gleeson) and his social gadabout wife Daphne (Margot Robbie), forgo their London based literati life and move to the country.

Their young son Billy (Will Tilston) a cute dimpled movie moppet if ever there was one, tags along for the ride, together with his much loved Nanny Olive (Kelly Macdonald).

The country air is good for father and son and events conspire to leave them to their own devices, with the aloof father tentatively and unexpectedly creating a bond with his young son.

Having moved away from London and a successful career as a playwright, very little writing is going on. There is an anti war treatise in lengthy gestation but hardly what the post war public is crying out for.

A simple uplifting story about a bear who likes honey experiencing gentle adventures with his friends, are just what the doctor ordered. They become successful, wildly successful, which is good for Mrs Milne, provides validation for Mr Milne and destroys Billy’s childhood in the process. Before long he is being shuttled around like a performing bear himself, his own personality submerged within the very public Christopher Robin persona.

There are later scenes with an older Billy, expertly handled and played by Alex Lawther, shows real anger and frustration with the price he must pay for his father’s success.

The story is multifaceted and interesting but the acting of both Robbie and Gleeson is adequate rather than outstanding, British stiff upper lip and all that. Young Billy serves the story as well as he can in an androgynous smock and sandals, a style common for young boys in upper class families at the time.

Kelly Mcdonald and Lawther take the acting honours, both showing what real movie acting is about, owning all the scenes in which they are featured.

Overall a well staged downbeat movie about an interesting subject that will be new to many, a footnote to one of the most famous literary creations in the world. A further example of the maxim, that any success comes at a price, with the price not always paid by those gaining the fame and fortune.

However, the film in many ways, makes readers somewhat complicit. Realising in a small way, that by enhancing their own childhood they unknowingly destroyed another boys idyll. An uncomfortable message to take away, if “Winnie the Pooh” means something to you.

But as they say, “the wonderful thing about Tiggers, is Tiggers are wonderful things”, if you recognise this, you should enjoy the film and the context it provides to the stories.

A well made period drama, filling in the blanks in a famous origin story, without a superhero in sight. Arguably and understandably, playing fast and loose with facts and timelines to create cinematic tension but well worth a look.

One thought on “Goodbye Christopher Robin ***1/2”