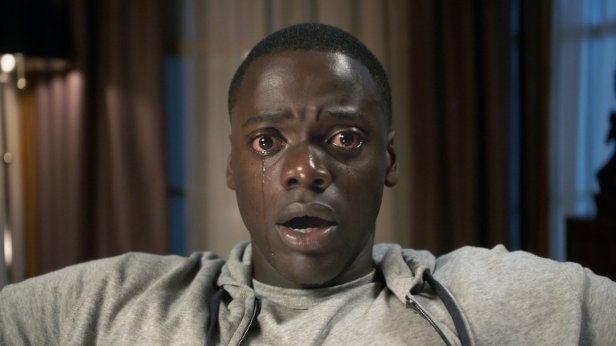 “Chris” (Daniel Kaluuya) and “Rose” (Allison Williams) are at that point in their relationship when the parents have to be met, necessitating an awkward but necessary trip to the burb’s.

The parents “Missy Armitage” (Catherine Keener) and “Dean” (Bradley Whitford) seem welcoming enough, pleasant, liberal and cool with Chris, did we mention he was African-American?

The parents almost fall over themselves to show how racially accepting they are, “we would have voted for Obama third time if we could”, Rose’s father explains.

All is going splendidly, the fact that Rose’s mum is a hypnotist is mentioned in passing. The house also employs various staff, housekeeper “Georgina” (Betty Gabriel) and gardener “Walter” (Marcus Henderson) who also happen to be African-American. Apparently the family did not want them to be out of a job when their parents died.

All reasonably explainable so far, Chris acts in the manner expected of a young man when attempting to impress his girlfriends parents.

Needing a sneaky nighttime cigarette, Chris stumbles on Missy Armitage, who offers to help with his smoking habit, a quick bit of hypnosis should sort that out……

What follows is borderline horror but mostly a thriller with social undertones, highlighting the continued racial divide in the US. This aspect is not front and centre but the heavy underlying subtext is there for anyone who cares to look.

If you are not a horror fan, such as this reviewer, there is one jump scare at the start. Also some moderate blood towards the end but nothing your average thriller wouldn’t normally display.

What does stand out is Kaluuya, who remains believable throughout, acting in ways consistent with his circumstances. i.e. not doing stupid stuff and when things get weird and they do, wanting to get the hell out.

Mention also to Chris’s buddy “Rod” (LilRel Howery) who entertains in all his scenes, as a TSA agent with attitude, lots of attitude.

To mention more of the plot would ruin the suspense and surprises, which would be a shame as this feels fresh and unusual. The film also scored big ($255m) in the States off a small budget ($4.5m), a huge success for director and writer Jordan Peele .

Like many suspense films, not everything is explained nor would stand up on second viewing but no matter, this is fun whilst it lasts.

The main caveat with the film is arguably the ending, if you watch this at home, the DVD/Blu-Ray has an alternate ending. Regretfully the “not used” ending remains a more plausible conclusion, only serving to highlight how far the US has to go.

The director deciding to go with his own choice, a more optimistic view of the world and good for him.

A horror film for non horror fans. Well written, acted and with some surprising twists, Daniel Kaluuya and director Jordan Peele are people to watch on this evidence.