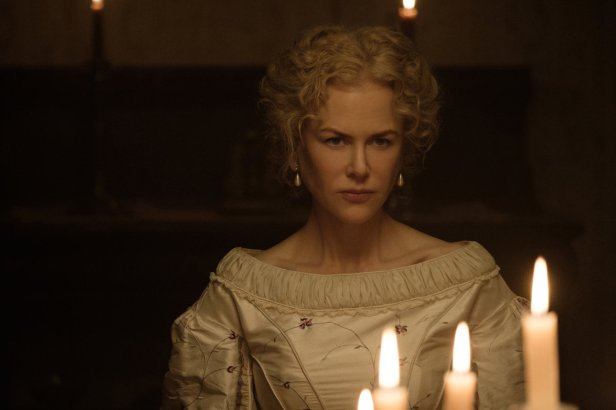 “Miss Martha” (Nicole Kidman) oversees a girls school in Virginia during the American civil war. Together with “Edwina” (Kirsten Dunst) they are teaching the young ladies in their care, including “Alicia” (Elle Fanning), the necessary skills a society lady should learn.

So whilst learning the finer points of crochet, deportment and french nouns, the largely illiterate men folk are busy slaughtering each other in nearby fields. A fact intimated with subtle effect by the ever present, yet distant cannon fire.

When an injured Yankee, “Corporal McBurney” (Colin Farrell) turns up in the grounds and is brought into the house to recuperate, this understandably turns the all female house upside down.

The fact the soldier turns out to be charming and handsome sends the ladies into fits of vapor, with petty jealousies springing up at all levels of the household.

This is the latest film from famous director Sofia Coppola, who usually details the trials and tribulations of millennial’s in their suburban setting, so this is a departure.

The setting is claustrophobic, you can feel the heat and southern faded grandeur of the house and inhabitants. The school is preparing young women for a world that arguably no longer exists and the corporal’s presence is the equivalent of a match in a tinder box.

Kidman, Dunst, Fanning are all excellent and Farrell is as you would expect, together with his stock standard Irish accent, excused during the film as being “fresh off the boat”.

The story is slight and the film relatively short, although there is a pervading sense this will not end well, with the outside world barely intruding. As usual, Kidman manages to be highly believable in another very different role, strict yet vulnerable whilst attempting to do the best by her young charges.

Not to every taste perhaps, a film with nothing really conclusive to say. Is the corporal a good or bad man, do the ends justify the means, the screenplay leaves the audience to decide.

Good to see another film/show in 2017, where the female characters take centre stage and largely dictate their own destiny.

Not a horror by any means, despite what the trailer might indicate. Although the significance of a blue rag tied to a gate has never been as important.

Worth a watch if the subject matter is of interest

I VOTED. YOUR TURN.