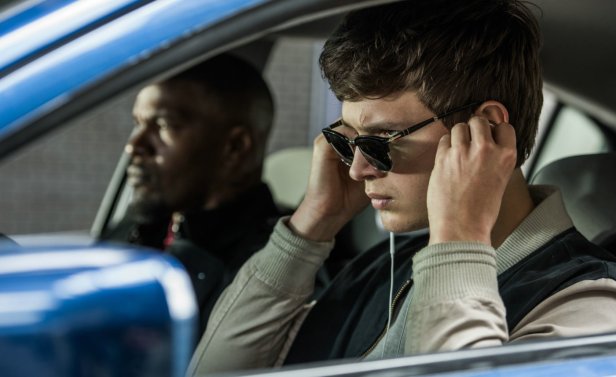 After a bravura start, a bank heist followed by a high speed “done for real” good ole’ fashioned car chase set to a blistering music track, the film drops down a gear.

This is a movie with high expectations and critical acclaim from many quarters. Potentially described as Tarantino lite, the film deploys many classic tracks, casual gun violence and car chases, lots of car chases.

“Baby” (Ansel Elgort) is a getaway driver, haunted by a car crash that claimed his parents, then brought up by his mute and much loved foster parent “Joseph” (CJ Jones).

With tinnitus still plaguing his every moment, he plays tracks on his many and much loved iPods to drown out the internal noise.

The lad stashes some cash as he repays a debt to “Doc” (Kevin Spacey), having jacked his car when full of “merchandise”. Nobody usually gets hurt and the bank heists go well, with lots of tyre screeching, shouting and touting of weapons.

When Baby meets “Deborah” (Lily James) he realizes he needs to get the hell out of this business, before anyone including himself gets hurt. As the body count starts to rise, as the “last job” turns into one more, he places himself and everyone he loves in danger.

Elgort is for me a bit vanilla in the role, you never really feel he is part of the film, almost rising above the action. James replays her perky “Rose” from Downton Abbey type role, albeit in contemporary dress.

Jamie Foxx plays “Bats” one of the crazier members of the rotating heist crew, which is saying something. Turning it up to eleven, he precipitates a downward spiral in the team. Kevin Spacey as “Doc” manages and plans the heists, one minute threatening everything Baby has and the next, experiencing a “road to Damascus” moment which is perplexing and wildly out of character.

Jon Hamm as “Buddy” together with his lover and partner “Darling” (Eiza González) are arguably the most interesting characters. Buddy centres the last few acts of the film and at least provides some interest, albeit proving ridiculously resilient to harm.

But the characters all feel fake, the action is so, so although the car chase scenes are expertly staged and played against some great tunes.

Centering the action on Elgort only serves to highlight his relative inexperience against the other actors. The early slightly surreal musical interludes, almost “la La Land” like, also break the mood and unsettles the tone of the film, which seems inconsistent.

Director and writer Edgar Wright  has tried to create something different and has in many ways succeeded but maybe not for everyone. A shame as the reviewer really wanted to enjoy this film and after Wrights earlier movies had high hopes.

Perhaps it doesn’t help all the characters are criminals and frankly deserve what they get. There are no good guys to root for, they are all tarnished in some way, “Joseph” & “Deborah” notwithstanding.

A heist movie with some “killer” tracks, violence, car chases and decent performances.

Overall a mild let down to this viewer but clearly loved by most, so if the trailer hooks you in, well worth a watch.