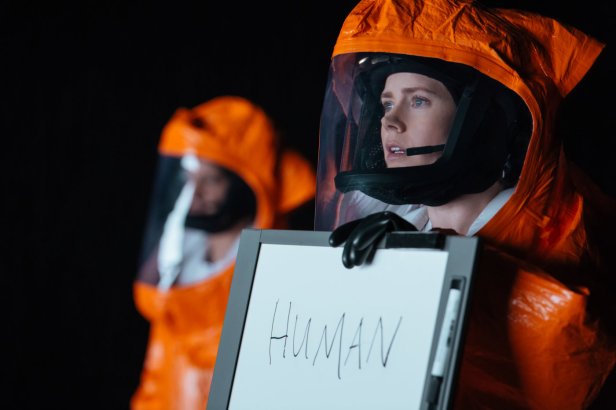 Laser blasts, good versus evil, alien monsters picking off unsuspecting crew, wisecracking anti hero saving the world, you will find none of the above here.

Placing the emphasis on “Science” within the Sci-Fi genre, this cerebral film based on the short story “Story of Your Life” by Ted Chiang, trends more towards “2001” than “Star Wars”.

University linguist “Louise Banks” Amy Adams is called upon to assist the US army with a slight problem. “Colonel Weber” Forest Whitaker, has to choose between two experts. A army helicopter landing on the lawn suggests Louise has been chosen.

The problem? – twelve alien objects shaped like a giant inverted black pebble have positioned themselves floating just above the ground at twelve different locations in the world. Their location appears random, they are not overtly aggressive.

The “ships” open a door to allow entry every eighteen hours. “First Contact” has been attempted with the heptapods (think octopus like creatures) who appear though the fog within the ship, it has not gone well.

No progress has been made on the big questions, who are they, where are they from and what do they want? This is obviously hampered by creatures who may not understand what “they” , “where” and “want” means.

Partnered with a theoretical physicist “Ian Donnelly” Jeremy Renner, the pair start interacting with the aliens, eliciting ink blot symbols from the creatures displayed on a screen, as communication finally commences.

Director Denis Villeneuve previous films have been reality based and in many ways this is no different. Does the world stand around patiently whilst the scientists “play nice” with the aliens. Of course not, armies are prepared, the general public are fearful, panicking and looting whenever opportunity presents.

In this case China is presented as the gung-ho, if it moves blow it up, if it doesn’t blow it up anyway brigade. Of course this was made before certain US political events occurred but no matter, the paranoia and fear is well represented and feels real.

So what’s the film really about? a good question and arguably one not answered by the underlying story or screenplay. Ultimately posing deep philosophical questions that may linger with you, long after the closing credits.

To make this work, you need great actors and direction. Amy Adams has never been better, showing vulnerability, intelligence and likeability in a difficult role. Renner and Whittaker provide generous solid support, happy to take a back seat to allow Adams to drive the story.

Director Villeneuve manages to mix the fantastical with the ordinary, the scissor lift into the spaceship being a concrete example. The screenplay is thoughtful and builds to a reveal of sorts, always hiding in plain sight.  Aside of one rogue army unit, the actions of all concerned seem plausible and the underlying question asked is an intriguing one.

If we knew, would we still carry on?

A Sc-Fi movie refusing to take the easy route, delving more into the human psyche and what it means to be human, free will, tolerance and understanding.

Engrossing and managing to say true to the promise of early scenes without resorting to easy pat endings, with not a light sabre in sight.