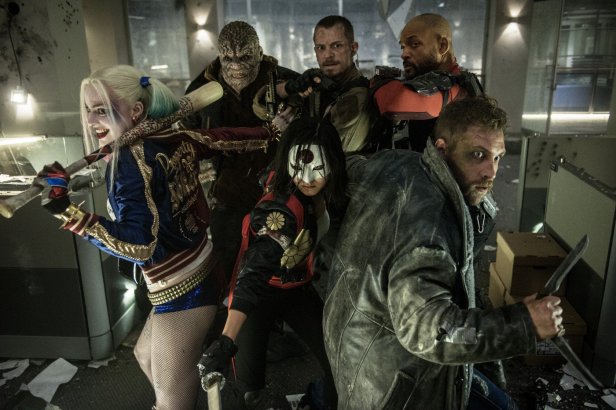 With the ongoing real life DC Comics vs Marvel face off, both studios are raiding their back catalogue looking for obscure superheros for a quick brush up, origin story and inclusion within their respective marquee movies, “Justice League” or “Avengers”

It may not be great art but makes great commercial sense, expect this trend to continue.

With the “Suicide Squad”, director David Ayer is attempting to tame a “Deadpool” style character group within a ratings friendly PG13, no easy task.

To combat a crazy world and with Superman no longer on the scene, “Amanda Waller” Viola Davis persuades government suits and military top brass the only way to combat madness in the future is to fight crazy with crazy.

Enter the bad guys to act on the side of good, all released from maximum security prisons, with a death threat looming large over their heads.

Of course even bad buys turned good, need a nemesis and “The Joker” is on hand to mess with peoples heads as Quinns on/off squeeze, with Jared Leto faced with the unenviable task of being the “next” Joker.

This is an origin story so it takes a while for the film to establish the characters before the story, a word used loosely in this context, gives them something to do. The earlier part of the film, more grounded in a semblance of reality is arguably more fun.

Smith is largely sidelined in his own film but the stand out is Margot Robbie who struts, preens and just acts bat shit crazy for all she is worth. Viola Davis also adds a level of gravitas, although just being stern among this groups firepower does stretch credibility somewhat. But if you want realism you have wandered into the wrong film.

Is it fun, yes to a certain extent, although not a fan of unnecessary on-screen violence it’s notable that several scenes appear abruptly truncated, just when something graphic is about to happen. Obviously the theatrical version was trimmed to capture the lower rating, arguably the film suffers as a result.

Unusually this is a film that needs more violence to carry the story, imagine “Deadpool” without the casual almost comical gore and it would not work, this remains true here. “Guardians of the Galaxy” proves you do not need violence to have a box office hit but this story and these characters just can’t really play nice, they are born to be bad.

Mostly fun although somewhat chaotic and not quite the film it could have been with a harder edge and certificate.

But if you like your superheroes crazy, plain bad and ideal inmates for Arkham Asylum, you have come to right place.