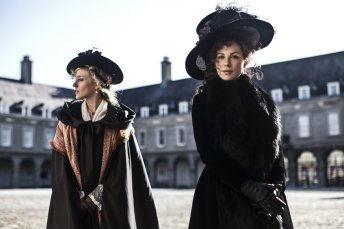 Kate Beckinsale takes a break from killing in the “Underworld” series, to cut people down to size with nothing more than a withering look, in this Jane Austen inspired period piece.

Swapping skin tight leather jumpsuits for colossal frocks and bustles will almost certainly limit the target market but for those seeking intelligent articulate wordplay, there is fun to be had.

Director Whit Stillman has taken Jane Austen’s novella “Lady Susan” and created a frothy concoction, magpie like taking bits and pieces from genres to create this period romp with the emphasis on comedy.

Beckinsale is “Lady Susan Vernon” attempting to outrun her personal scandals by laying low with her in laws. Whilst there, she decides to occupy her downtime by attempting to find a suitable husband for not only herself but her long suffering daughter “Frederica” Morfydd Clark.

By suitable this is determined by wealth or status, or even better both. Real love has nothing to do with the equation, if one can tolerate ones new partner without being physically ill, this is an added bonus.

This is one of those films populated by great character actors Tom Bennett, Stephen Fry, Justin Edwards and younger actors Xavier Samuel playing the object of the assorted desires. Nobody even comes close to doing any real work, or knows someone who does. Smart things are said and lives are rescued or destroyed with the smallest of actions or words.

Whilst the costumes and locations are as you would expect, picture perfect, the film jumps from one situation to another seemingly missing exposition. People fall in and out of love apparently off-screen before we are invited to a wedding that receives little notice.

There is nothing wrong with the acting, Beckinsale dispenses bon mots and put downs with some aplomb.

Of her companion, she explains, “As there’s friendship involved, I’m sure that paying her wages would be offensive to us both”.  Also particularly apt in 2016, “Facts are such horrid things”

But the best character by far is “Sir James Martin” (Bennett). A man blessed in income and land but at the back of the queue when handing out intelligence. A perfect match in the late 1800’s and arguably not beyond consideration in the 21st century.

The story sweeps along and a conclusion is reached, occasionally leaving the audience in the dark, which is a shame given the promise, talent and source material on offer.

Fun and enjoyable whilst it lasts but at 92 minutes this is a quick gallop through Austen’s lesser work. Somewhat marred by some strange editing choices that may leave some viewers believing the film reel or DVD has skipped a chapter or two.