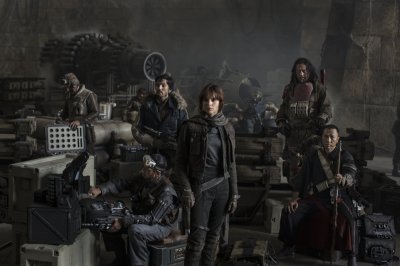 Disney paid George Lucas $4.05 billion for rights to the Star Wars (SW) franchise, this is beginning to look like a bargain as the Mouse Kingdom continues to build on the SW universe with a $400m opening weekend.

After the huge commercial and largely critical success of Episode 7 (Force Awakens), studio execs were keen to explore any gaps in the original trilogy story. After all just how did Princess Leia get those Death Star plans to upload into R2-D2?

Here we have the answer, a prequel neatly dovetailing into the opening scene of “New Hope” the original film from believe or not, 1977.

Following opening dramatic scenes with a young Jyn Erso (Beau and Dolly Gadson), the seeds of rebellion are planted in her engineer fathers mind (Mads Mikkelsen). Persuaded back to work on the Death Star, he formulates a way to avenge an earlier tragedy and assuage his growing guilt.

After escaping with help from “Saw Gerara” (Forest Whitaker) Jyn Erso grows up and is imprisoned on planet Wobani, before being rescued by rebellion forces and in particular a new droid K-2SO (Alan Tudyk – voice).

Meanwhile the rebellion under the leadership of “Mon Mothma” (Genevieve O’Reilly) are concerned the Empire is building a new super weapon that can destroy planets, a well funded concern.

Obliged to join the rebellion Erso (Felicity Jones) is joined with “Cassian Andor” (Diego Luna) with motives uncertain, together with “Chirrut Imwe” (Donnie Yen), “Bodhi Rook” (Riz Ahmed) and “Baze Malbus” (Wen Jiang), all with skills of their own.

The story follows the almost suicidal mission to retrieve the Death Star’s Achilles heel, with the rationale for why this weakness ever existed neatly explained.

The action is fast and furious and it’s exciting to see the original SW ships, X-Wings, Y-Wings, Star Destroyers and Stormtrooper’s together with the original Rebellion capital ships. Admiral Ackbar gets more dialogue than the famous “It’s a trap” and the story fits neatly into the niche identified by the creative forces behind the film.

Whilst the effects are cutting edge, the technology on display remains within the older SW canon galaxy with flashing lights, crude switches and a real down and dirty feel, everything well used, worn out.

K-2S0 is a great character, adding much needed humour into the proceedings and adds poignancy to later scenes. Director Gareth Edwards has done a fantastic job of capturing the tone spirit and feel of the original films, an impressive feat. It also good to see the cast expanding with a more international mix, adding to the feel of the film.

Bad guy duties are notably filled by”Orson Krennic” (Ben Mendelson) before the true dark forces are unleashed by the man himself, “Darth Vader” (James Earl Jones – voice) and a CGI created “Grand Moff Tarkin” (Peter Cushing – albeit deceased). The technology is impressive and whilst just discernible as CGI, shows what will be possible in the very near future. Actors are reportedly already adding clauses to their wills to accommodate the likelihood of being “resurrected” after their death.

Jones is another strong female lead character and acquits herself well and all the supporting characters are great fun and played well, the closing scenes of sacrifice are especially meaningful, unusual in a film of this type.

Not much to dislike here, with crazy aliens, and nods to the past without slavishly following the originals. This brings the SW universe to an ever expanding audience young and old. If spin off/SW Story movies are this much fun, bring them on. With VIII due next year and a Han Solo origin film planned, there is plenty more for SW fans to look forward to.

If you enjoyed the Star Wars trilogy, you’ll love this film with all vestiges of the “new” prequels all but banished from memory. A fitting hors d’oeuvre for the main trilogy and arguably even more successful than “Force Awakens”, itself a fun extension of the SW universe.