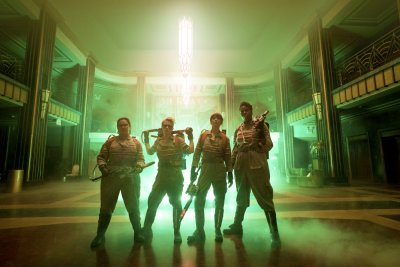 Hollywood continues to raid it’s back catalogue for remakes, prequels and re-imaginings, sometimes it’s difficult to keep up, just how many Spidermen can there be?

Of course take a much loved family treasure such as Ghostbusters and (pause for drum-roll) make the main characters women and the Internet will likely explode….

Director Paul Feig has taken the original template and replicated the same feel, style and plot of the original film. Arguably this does not advance cinematic history one inch but no matter, this remains fun just with a female cast.

Following an amusing prologue indicating ghosts and tour guide hucksters are real in equal measure, we encounter Dr Erin Gilbert (Kristen Wiig). Erin is desperately attempting to toe the University line with her dean “Harold Filmore” (Charles Dance), despite her previous past believing in ghosts and all that goes bump in the night.

This attempt at respectability is not helped by her association with her previous research partner “Abby Yates” (Melissa McCarthy) and her new even kookier assistant “Jillian Holtzman” (Kate McKinnon). When Abby comes calling after a previously written embarrassing book becomes public, the possibility of a University chair tenure starts to recede.

Eventually teeming up with this disparate group is MTA officer “Pattie Tolan” (Leslie Jones), completing the comedic group. Once the business is loosely formed, they are aided, if that is the right word, by dumb as rocks receptionist “Kevin” (Chris Hemsworth). The team then go ghost hunting complete with pimped up hearse and ultimately the original headquarters.

Acting honours, McCarthy is her usual movie self, Wiig perhaps gets most credit for the “straight-person” performance, as crazy whirls around her, adding a”lovesick puppy dog” routine with Hemsworth is fun. McKinnon gets to do cool crazy and does it well, Jones gets too little to do but maybe will get more to work with next time out.

Director Feig uses Hemsworth to great comedic effect, hang around for his dance routine at the end of the movie. Quite rightly the focus is on the girls, who kick ectoplasm butt just as well as our previous heroes, who incidentally cameo if you keep a keen eye out – (RIP Harold Ramis)

Strangely the world did not end or lights dim, just because the main characters were women, who would have thought?…….

So all in all, a fun undemanding film that adds nothing but equally does not detract from the original.
Summary

Fun, disposable but entirely in keeping with the original and with enough star power and ecto goo to stretch over another film, should box office allow