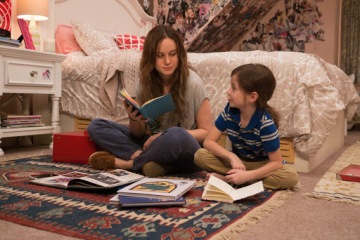 We meet five year old “Jack” (Jacob Tremblay) and “Ma” (Brie Larson) as they go about their usual daily routines. Cooking, sleeping, washing up and doing their exercises.

Space is a bit of a premium, there is not much light, just one skylight, food is very limited and Jack has to sleep in a wardrobe when their captor arrives to rape his mother most nights.

This is a difficult watch, Jack and Ma are held captive in a tiny soundproofed room with no contact with the outside world, in fact Jack has never seen beyond the walls in which he is confined.

Ma looks after him as best she can, inventing an imaginary world to keep Jack amused but he is getting too old, his 5th birthday prompts her to start de-constructing the fake world she has built to protect him.

There is nothing graphic here but the ever present threat hangs like a morning fog over all interactions. The evil is more sinister for the occasional flashes of humanity shown by the monster keeping them away from the world.

The relationship between mother and son is beautifully and believable created, director Lenny Abrahamson teasing not only an Oscar winning performance from Larson but also a captivating turn from his young actor Tremblay, who is quite astonishing at times.

At about the mid point of the film, there is a tense, engrossing and nail biting scene, as good as any you will see this year. Never has a rolled up piece of carpet ever been so freighted with opportunities, good and bad. This is what cinema is all about, total involvement and shout at the screen good.

By necessity, later scenes do dissipate the tension and whilst accurately portraying what might happen in the circumstances, this feels more ordinary and melodramatic. Joan Allen is as compelling as ever but William H Macy feels underused, albeit anchoring an important scene.

Overall perhaps enjoyable is the wrong word but a glimpse into an abyss that hopefully few experience, made watchable by fine performances and restrained direction that largely shields the audience from the true horrors.

Despite the content, this is ultimately a rewarding and uplifting watch. Both human spirit and a mother’s love for her child managing to find the light, despite being confined.

As Jeff Goldblum so eloquently said in Jurassic park, “life will find a way”