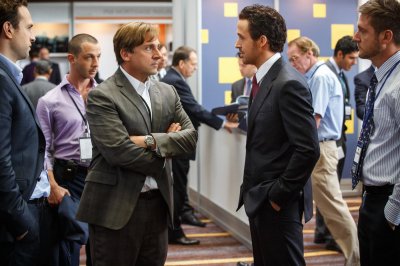 If you thought you were already a cynical person, you may need to re-calibrate after watching this film.

Essentially Burry “did the math” and worked out the US housing bubble could not and would not continue. He knew the repackaged mortgage debts being traded at AAA ratings were effectively worthless. The house of cards would fall, it was just a just a question of when.

The very banks that were to teeter on the edge of collapse later, were very keen to take his money on a bet that they knew would never happen. Burry essentially “shorted” the market and stood to make a fortune on the misery of others.

This sounds judgemental but is the way markets work and by the time the end credits run, any enmity towards Burry will be dwarfed by your contempt for some “big banks” and their supreme arrogance and greed. None of this of course comes as a surprise to anyone who takes even a passing interest in finance but even so.

This is a fundamentally simple story but as with all financial instruments, there are deliberate attempts to confuse people with acronyms and technical jargon. Luckily the film breaks the fourth wall by introducing off the wall simple explanations from Margot Kiddie in a bubble bath and Selena Gomez at the Casino. Finance for Dummy’s if you will.

Gosling also narrates and talks to the camera on occasion, sounds odd but overall works well. We also get to meet young hopeful investors Charlie Geller (John Magaro) and Jamie Shipley (Finn Wittrock). Youngsters so out of the loop, they need to bring in grizzled ex trader Ben Rickert (Brad Pitt) to allow them to play at the big boys table.

The film is fast paced, foul mouthed and desperately cynical, all of which are exactly what such a tale needs, the very situation the phrase WTF was invented for.

How such a situation could occur, be allowed to continue, be discovered, patched up with tax payers money and then leave no-one is to blame, still beggars belief.

Of course the situation is better controlled now? If history tells us anything, this is arguably somewhat naive. Big Banks are still just that, big. Bonuses have returned and there are attempts to lessen, not increase regulation and almost no-one went to jail. As always it is those with very little who suffer the most.

What could be a dry subject has been funked up to the max and with this calibre of acting royalty on display, the film is certainly never boring. Carell in particular continues to extend his range, showing he has real talent away from his comedy roots.

Bale is good, almost too good at the start of the film, stick with it as his mannerisms and actions do make sense over time.

A salutary lesson not learned but as “entertainment” the film makes for an interesting, easily digestible and thought provoking watch.