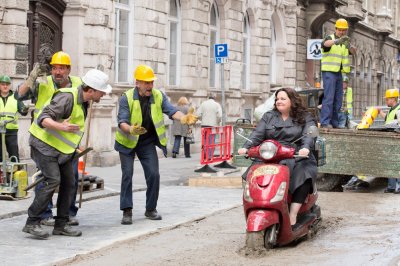 The concept of James Bond is ripe for parody, a source of amusement already richly mined by the Austin Powers films, before the rich seam of humour ran out.

Director Paul Feigs new film starts well, with 007 lookalike “Bradley Fine” (Jude Law) cornering his shadowy prey, the only man left who knows the location of the archetypal movie “Nuke in a suitcase”.

Unfortunately it does not end well.

Whispering in his ear during his missions is CIA back office agent Susan Cooper (Melissa Mccarthy), bubbling over with unrequited love for her charge, she steers him to safety as he effortlessly disposes hordes of henchmen.

When plans go awry the equivalent of “M” (Alison Janney) decides somewhat bizarrely that Cooper is best placed to move into fieldwork. Armed with a plethora of dowdy cover aliases, the very antithesis of Bond she takes it to the bad guys, on occasion falling with style rather than really flying. There is some crude stereotyping going on here but the lead character is a woman, so let’s celebrate that instead.

Cooper is “helped” by her friend and new controller “Nancy B Artingstall” (Miranda Hart). She also receives unwanted and rather dubious assistance from the supremely confident but completely incompetent fellow agent “Rick Ford, played by Jason Statham for laughs, albeit intentionally on this occasion.

Ultimately, whist the premise is fun and Mccarthy runs through her usual shtick with some aplomb, this wastes the opportunity presented. The film adds unnecessary levels of swearing and violence that causes the tone of the film to swing wildly. Whilst Statham is amusing, his usual level of profanity seems out of place and the included brutal knife fight, again seems out of context.

Various exotic film locations including Hungary, Italy and France are used as the film inexorably moves towards a rather weak dénouement, complete with redundant 50 Cent cameo, by which time the audience may no longer care who does what, to whom or why.

A reasonable spy parody premise that has been largely wasted, with gratuitous violence and swearing neither of which are necessary to get the requisite belly laughs across.

Disappointing, yet hugely successful which arguably, is another disappointment in itself