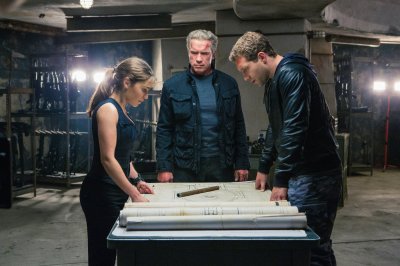 Remaining true to his famous movie quote, Arnie is back. Although it’s now debatable whether the franchise or Schwarzenegger’s career is more in need of a reboot.

After the confusing and almost standalone entry “Terminator Salvation”, the series needs to hit the exoskeleton out of the park, if the franchise is to remain bankable and move forward.

The human resistance led by John Conner (Jason Clarke) has finally found a way to beat the machines but of course nothing is ever that simple. Eventually Kyle Reese (Jai Courtney) is sent back as time travel dictates sans clothes to 1984, to protect Sarah Conner (Emilia Clarke) from a “Young Arnie” Terminator.

Turns out she does not need saving, although at this point we have several Terminators on the loose. “Young Arnie”, “Old Arnie” or “Pops” (Schwarzenegger) as he is now affectionately known by Sarah and finally “Cop T1000 – Themed” Terminator” (Byun-Hun Lee).

The story is too confusing to describe in a short review but essentially via the handy movie device of  a fractured time-line, this is a chase film with fantastic set piece action scenes, hoping to replicate the success of T2.

Clarke who must be enjoying acting in more modern dress, will also be pleased to lose the Game of Thrones dragons off her shoulders for a while. Whilst she makes for an attractive Sarah Conner, her handling of weapons and actions scenes are not on a par with the pumped up Linda Hamilton from T2, one questions why anyone would even try.

Courtney makes for a very bland central character and Jason Clarke is saddled with differing character motivation shifts that must leave him wondering who are friends or enemies after a while.

As Terminators, Lee does best.  Essentially channelling his inner Robert Patrick vibe as a faceless yet remorseless killer, the film is weaker once he leaves the action. Which leaves Arnie, both young and old. Arguably placing both characters together only serves to highlight Schwarzenegger’s more mature years.

It is clear stunt people come to the fore in these scenes, yet even Arnie’s interplay with Clarke feels forced and the running joke on his ability to blend in falls flat. “Old but not obsolete” is a line of dialogue repeated a few times, arguably it needs shortening or amending slightly.

Bearing in mind this is Schwarzenegger’s main cinematic hope for re-invention or retirement plan if you will, this is a mediocre effort at best. The action sequences and CGI effects are as impressive as you would expect, helicopter chase notwithstanding, however this has all been done before and better. Watching indestructible cyborgs crashing through walls and and taking multiple high velocity rounds before healing themselves, gets old quickly.

Character actor JK Simmons also gets a look in but is rapidly dropped again, serving no real purpose to the story.

With a poor US domestic showing, this represents another film saved by the huge potential  international audience, with a box office of $440m to date.

Representing almost a “best of hits” collection of Terminator scenes, just not done as well. The younger actors only highlighting Arnie really is “too old for this shit”

Neither a good nor bad film but arguably re-watching T2 again would prove a better experience. Despite the films coda, let’s hope a future is set with no further sequels.