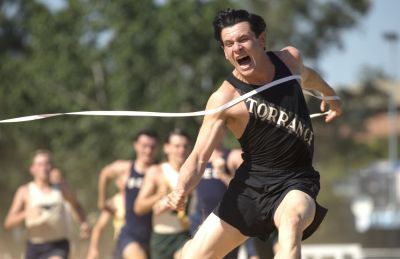 A film largely well known due to the presence of celebrity director Angelina Jolie, this recounts the amazing and almost unbelievable true story of US Olympian Louie Zamperini (Jack O’Connell).

Commencing with a superb opening sequence with Zampernini part of an almost doomed B-24 “Liberator” crew bombing pacific targets. The feel and sheer naked terror of the exchange is well conveyed with excellent steered audio effects, the sequence also highlighting just how young the combatants were.

The film then switches to Zamperini’s earlier life and Olympic aspirations, including the infamous Berlin games, under the watchful and increasingly disappointed eye of one Adolf Hitler.

Once he’s been established as an overall good guy albeit with a fierce independent spirit, we see him grow into the young man we met at the start of the film. We then fall back into a more standard chronological tale.

The trailer already marks out many of the beats of the film so adding that Zamperini and crew crash land in the Pacific and are eventually rescued by the Japanese navy are no give-aways. The extended period in the ocean is well filmed and the young cast including the on the rise Domhnall Gleeson are believable in their predicament.

Not only fighting lack of food, water and sharks but when their saviours arrive, their hardship arguably increases rather than diminishes. Life in a Japanese POW camp is well documented here within the constraints of the film’s rating. The camp commander a.k.a. “The Bird” (Myavi) distils all of the movie stereotypes into this role, effectively conveying the sadistic tendencies we unfortunately expect from such a film.

Ultimately the film is about survival and hinges on being unbroken by the end. As the ending credits mention briefly, no-one is really left unscathed, whether they survive or not. One can only question the motivations of the cruelty on display. Humiliation, frustration, petty jealousies, it is difficult to imagine.

The film arguably works best in the first half with Jolie maintaining a good grip on the technicalities and practicalities of sea and apparently aerial based scenes, augmented substantially with very effective CGI.

The latter half of the film does tread well worn movie POW camp settings and storyline, albeit based on fact and arguably loses some impact as the story progresses. Audiences have been here before, however well acted the scenes. The film neither looks away nor is gratuitous in the violence on display, with a tone that is consistent throughout, which is an achievement in itself.

O’Connell looks to be a star in the making, showing all the attributes necessary for leading man material in what must have been a challenging shoot.

This is an amazing story and is well recounted here, elevating the film well above the usual movie of the week and largely does justice to the source material.

In some ways an old fashioned take but enlivened by state of the art effects albeit largely hidden but allowing this amazing story to be placed onto the big screen.