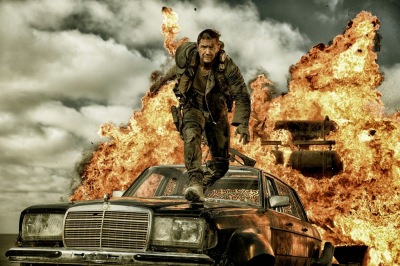 No, not Las Vegas but Mad Max which finally returns, looking grungier, just as monosyllabic, madder than ever and populated with breathtaking real stunts and driving skills.

If previous films went to 10, think 11 or 12 for this episode. From the off, Max (Tom Hardy) aboard his V8 Interceptor in taciturn mode, is catapulted into a surreal world. Deformed characters, flame throwing guitar players, breast feeding women producing milk that leads eventually to a disconnected slow motion shot in the desert with a fireman’s hose and….

If you thought the trailer was bonkers, you ain’t seen nothing yet. Original Mad Max director George Miller has had thirty years to let his imagination run riot, it certainly shows here.

The action starts as Max is quickly captured and used to provide blood to keep the pale skinned  “War Boys” in good shape. These characters act as cannon fodder on behalf of Joe (Hugh Keays-Byrne), a frighteningly masked warlord immortan who rules the “Citadel”. Complete with many wives and apparently plenty of breast milk to go around, he rules with an iron first and dispenses much needed water by the dribble, to his much ignored “peasants”.

When a break out occurs, Max has no choice but to tag along, masked and bolted like a ships bowsprit to the front of a chasing Nux car. He eventually gets to meet “Furiosa” (Charlize Theron), a woman with half an arm, a shaved head and similar world view to Max, along with her charges, cue the aforementioned slow motion scene.

This is essentially one long chase movie interspersed with short bursts of dialogue. The action is all on the screen, real stunts, real danger no doubt augmented with limited CGI but it certainly feels plenty real enough. The film looks fantastic, every shot an explosion of colour and framed for maximum effect, see the exploding flares against the desert back drop.

If you are looking for action, you will find it here and then some, the plot takes a back seat and attempting to find any real logic or coherence in the first third of the movie, will leave you bewildered. Some anchor points do later appear which helps the film but all the money is on the screen and if you accept the film for what it is, a visual and action feast, you will not be disappointed.

Despite having Max in the title the film is more about Furiosa and Theron yet again proves she can play any part a director throws at her. This may be a crazy world but Theron as Furiosa sure looks the part in it, deploying a subtle girl power feminist message whilst no-one is looking.

Hardy, once he dispenses with his frankly annoying mask, gets to look mean, incredulous and handles the action like a pro but he gets so few lines of dialogue he makes the Terminator sound chatty.

Nicholas Hoult as a “War Boy” also makes an impact, striving to wipe away years of brainwashing, he becomes essential to later parts of the story, “What a lovely day” indicates his mindset as mayhem rages from every angle.

Incidentally filmed partly in Namibia and South Africa although the story and plot lines do hark back to the Australian origins of the series.

Arguably not for everyone but for those prepared to suspend disbelief and enjoy what is on the screen, this is an amazing experience, quite unlike anything else on the big screen this year.

If you enjoyed Max before, then Max on steroids with a big movie budget may just be for you.