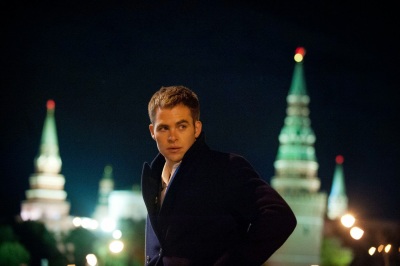 The late author Tom Clancy created Jack Ryan, a man born of the Cold war, initially with plots matching that period in our history, notably “Hunt for Red October”. Ryan over time segued into terrorist plots and infinite shades of grey in which we now live.

The actors playing Ryan in the films following Jack’s progress morphed from Alec Baldwin, Harrison Ford and Ben Affleck, before finally resting on the young shoulders of Chris Pine, yes we are in reboot territory.

For this film we receive a much compressed and refreshed origin story. A 9/11 inspired young Marine Jack Ryan is involved in a helicopter crash, now updated to a more relevant Afghanistan. In recovery, he is approached by a shadowy CIA type (Kevin Costner) and before you can say “There are other ways to serve your country”, Jack is a CIA analyst nerd, fieldwork strictly not required.

Handily a trainee Doctor in the shapely form of Cathy (Keira Knightley) is there to provide the love interest as he sets out on his road to recovery, deception and not so secret missions.

Before long of course, Jack is the only man who can save the world from disaster, all masterminded by a dastardly Russian throwback, Victor Cherevin (Kenneth Branagh). A fiendish plot has been devised to restore the Motherland to her previous glory, all condoned by those in charge, on a wink, wink deny all involvement type of fashion.

This is a very formulaic thriller not without enjoyable moments and action sequences but overall feels curiously detached and out of place in 2014. Pine makes a reasonable albeit younger Ryan, Costner suits the elder mentor role previously filled by James Earl Jones (Admiral Greer). Knightly with her usual obvious charms, does not make the most plausible medical expert and despite best efforts does not really fit the role she is destined to aspire to. However as part of an “action couple”, Knightley gets to do more than most female roles in such movies, getting involved in the plot and providing distraction where needed in every sense.

Whether Cathy’s relief on discovering why Ryan has been lying and skulking around was intended as a humorous line, it certainly hits the comedy mark, intentional or not.

Branagh channels his best charming and ruthless Russian caricature but despite best efforts still resembles the Branagh we know, despite a seemingly enthusiastic Russian dialect. There is an absence of real threat in the film, somehow we know everything will turn out all right, again this could be a slight softening of the screenplay to gain the required certificate.

Branagh who also directs, makes good use of his location budget, with many iconic settings, which does add a different feel to the action. Whilst implausible, the first threat to Ryan’s life is well played and ends with a good reaction shot, clearly indicating Ryan’s placement as an analyst, not a trained assassin. There is also an effective chase sequence with yet another handy torture technique for anyone not watching Game of Thrones, Homeland or any other mainstream TV and is short of ideas.

A by the numbers thriller with a outdated premise and characters more suited to the “old” cold war, a time when it was infinitely easier to establish who are the bad guys