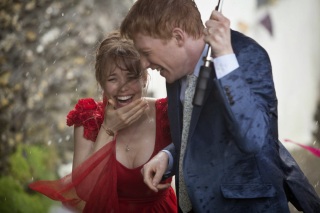 If you could rewind time and go back to correct your mistakes, making everything perfect next time around, would you?

This is the basic conceit behind the latest British love story/comedy from “Love Actually” & “Notting Hill” director Richard Curtis. With that pedigree, most audiences will know what to expect, although the high end “nobody actually works” has been toned down somewhat.

At the age of 21 “Tim” (Domhnall Gleeson), rather socially inept and certainly challenged in the girlfriend stakes, learns he has an inheritance. Instead of losing his father (Bill Nighy) and gaining a crusty old painting, he gets to keep the old man and know the secret only the male line possess, the ability to time travel.

Following the usual stages of disbelief and hiding in wardrobes, he eventually lands at acceptance. Rather than money, he utilises this new tool for love, by trying to woo the girl of his dreams “Mary” (Rachel McAdams). The trick is used sparingly to start but over time becomes a regular feature of his life.

The film is peppered with the usual Curtis trademarks, good music, great cast, offbeat locations and a slight story but benefits from gentle performances from a quality cast.

There are touching moments, especially for those perhaps deeper into their own life arc and no film with Bill Nighy in the cast list can ever be totally dismissed.

Domnhall and McAdams do good work, initial misgivings about the chemistry between the leads, gives way to something wholly believable as the pair grow into the roles together. Lindsay Duncan as long suffering mother and Tom Hollander as “Harry” both get a nod for fulfilling support duties well.

The film is arguably longer than it needs to be, there is one later storyline that might easily have been excised to prevent the film overstaying it’s welcome.

A perfect date night movie, with precious little to offend and should leave a smile on the face and maybe just a thought or two about seizing and enjoying every moment. Not deep stuff perhaps but arguably none the worse for a film aiming at pleasant and hitting the target.

Light, undemanding yet wholly enjoyable entertainment with a warm heart stitched firmly to the sleeve, perhaps eking a sneaky tear for those in the mood.

Not a Curtis classic perhaps but likely to improve your evening and if not, like “Tim” you can rewind and try again until your mood is just right.