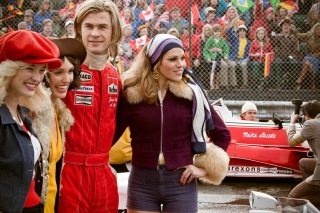 Audiences love to watch two sports people at the top of their game battling out man to man, do or die on the sports field or track. If the two combatants have gone past friendly rivalry to mortal enemies or each representing the others nemesis, then so much the better for TV ratings.

Formula 1 (F1) in 1976, when do or die could be taken quite literally. Driver safety was a low priority, cars were raw, everyone was learning and there was still room for a hard drinking, eccentric, drug dabbling, womanising, playboy with talent to make his mark.

Enter stage left, James Hunt (Chris Hemsworth) with an upper class English accent, skill to burn and a complete distaste for playing by the rules, working hard and respecting any form of authority.

Contrast this larger than life character with Niki Lauda (Daniel Bruhl), an Austrian with an abrupt manner, almost no diplomatic skills and personifying everything Hunt was not.

The two rivals fight small time battles in Formula 3 before Lauda buys his way into the fledgling “March” team as the second driver.  Promptly overseeing the rebuild of his car, Lauda’s real skill lay in setting up the car to be faster and better before he even started the race.

Meanwhile Hunt eventually stumbles into F1 under the “Hesketh” team, all champagne and aristocratic privilege, completely at odds with the more corporate F1 scene.

The pair race and the trackside enmity starts to build as the drivers jockey for position on and off the track, they eventually move to their respective premier race teams of Ferrari (Lauda) and McLaren (Hunt). The two drivers acting as polar opposites in their approach to their chosen vocation, lifestyles and attitudes.

As most viewers with a passing interest in Motorsport will know, there is a serious accident followed by an astonishing recovery and then a climactic 1976 world champion clinching race in Japan.

Director Ron Howard is a highly professional film maker and it shows here, the film is as meticulously tooled as the cars on display. The period setting is excellent, the on track speed is arguably the most exciting race footage ever shown. The sound and sensation of raw power waiting to be unleashed, the use of close ups and engine components, all add to perception of speed and nerve tingling raw danger. Tyres shimmying and scrabbling for grip on the tarmac on the start grid, drivers desperate to win or die trying.

The film is helped by a solid turn from Hemsworth, clearly having a blast portraying someone doing just that, having the time of his life. Bruhl gets the more difficult role and nails a portrayal that could have been unsympathetic in the wrong hands. The actor managing to find and show the intrinsic humanity and professionalism that lay below a rough, uncompromising exterior.

Hunt died in 1993 aged only 45 of a heart attack, ending a colourful, eccentric and unconventional life. In retrospect a world away from the current professional, in bed early, hit the gym and then eat well sportsmen and women, who tend to dominate the professional sports world. Out of place then and probably unemployable if transplanted to 2013.

There is little to fault here, however the female characters do not get much to do. Olivia Wilde as James Hunt’s “on a whim” first wife Suzy Miller, married apparently to  settle him down. That’s a fail right there. Miller is all big hats and tantrums, presumably not realising that marrying a womanizing, hard drinking F1 driver might have some ups and downs. Alexandra Maria Lara as Marlene Lauda, gets to look worried, long suffering and downcast but with not much else to work with.

Overall as good as it gets, taking great subject matter, adding some touching scenes, state of the art (but not seen) effects and teasing out some great performances, what more could you want.

Accessible, sexy, dangerous and with lashings of 1970’s glamour, there is much to enjoy with solid acting and superb racing sequences anyone can enjoy.