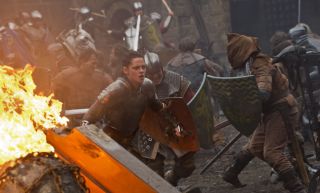 Hollywood loves new ideas or even better, old ideas without back end deals made shiny new again. So in 2012 we have two “Snow White” movies, the light hearted “Mirror Mirror” and the grittier, down and dirty subject of this review.

Ravenna (Theron) is the oh so beautiful wicked witch who has tricked her way to the throne, by dispatching the king and all hope throughout the land. Requiring regular top up’s of youthful energy to maintain her looks and youth for all eternity.

All is well, for Ravenna and her incestuous brother Finn (Spruell), although conversely life is not so good for everyone else, as the land dies and the populace starve and darkness falls “across the land”.

A ray of light flickers in the form of Snow White (Kirsten), the daughter of the slain king, locked up in a dank and dark prison after being separated from her high born childhood friend William (Claflin). Finally wising up to the fact that Snow White could both save or destroy her, Ravenna’s sends her besotted brother to deliver Snow White to her. Finn however, mistakenly allows her to slip through the castle defences into the “Dark Forest”.

A guide is required to track Snow White, he will be ruggedly handsome, melancholy with the loss of a loved one and initially drunk most of the time. Cue “The Huntsman” (Hemsworth), wise in the way of the woods and fighting but rather naive is most other regards.

Will the princess be restored to power, will the witch Queen bind the land in darkness, will dwarve’s be involved. Yes, probably not and most definitely, in that order.

The film commences with a well played prologue, the set up, initial fleeing and chase are visually arresting. The film establishing itself as “Lord of the Rings” (LOTR) lite. Obviously director Rupert Sanders channeling his inner Peter Jackson to middle of the road effect. Some sequences are lavishly filmed with stark bright colours and attention to detail but on occasion the tone is all wrong and tension dissipates. The effects, unusually created by many disparate special effects houses, are uniformly cutting edge, a bridge troll a notable stand out. The film benefiting greatly from high quality effects and the costumes are also worth noting, the budget is certainly on the screen to see.

The acting is variable, Chris Hemsworth manages to carve a believable rugged character and Spruel manages a fine line of 12 certificate malevolence. Theron is impeccably dressed and plays to the fairy tale aspects well enough, most original tales skewing much darker in reality than perhaps we remember them. The weak link unfortunately, is our “Twilight” star Kirsten Stewart. Whilst fitting the bill from the looks department, she also appears believably down and dirty where required, however many lines just come tumbling out like an early script read through.

Whilst Hemsworth and Theron can take rather weak lines and invest some gravitas, Stewart drags the believability back to zero every time she speaks. Clearly in this company her acting ability is shown up rather badly. The director has also taken an interesting approach to the dwarves, allowing top flight actors to play them through CG trickery (similar to the upcoming “The Hobbit”). We are treated to Ian Mcshane, Nick Frost, Ray Winstone, Toby Jones and even, in his last pre-retirement film role, Bob Hoskins. Whilst these sequences could have fallen over badly, in a Star Wars Ewok way, it actually works quite well.

The sequence in the fairyland however brings proceedings to a screeching halt and may have your average 14 year boy target audience running for the exit. This highlights perhaps the biggest flaw, who is the movie for? Too scary for young children but not hard edged enough to be a LOTR contender, constrained as it is by a 12 certificate requirement.

Overall then, a film that is largely good fun with some fine scenery chewing from Theron but uncertain of it’s tone and with a weak central protagonist. Of course, much of this will be overshadowed by the “affair” between the married director and lead actress, which is perfect gossip mag fodder but ultimately the film must stand by itself, which it does but only just.

With a $400 million take on a budget of $150m, clearly the film found an audience. Whether even Hollywood can squeeze out a sequel from a story with such finality, remains to be seen.