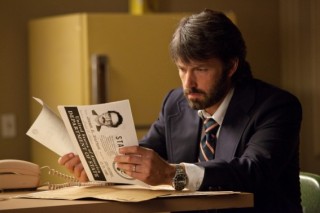 The phrase “sometimes truth is stranger than fiction” certainly applies here. The CIA planning to ex-filtrate six hostages from 1980’s Iran under the cover story of a Science Fiction film scouting for locations.

Based on a true story, which follows CIA operative Tony Mendez (Ben Affleck) as he attempts to brazenly snatch six hostages, from under the nose the Ayatollah Khomeini, during the 1980 Iranian hostage crisis.

A well summarized narration sets the scene, indicating that the crisis is at least in part, caused by American actions, providing sanctuary for the much despised last Shah of Iran.

The American embassy in Iran has been overrun and students now hold many hostages. Just before the Embassy was taken, six staff managed to escape, ultimately given sanctuary at the Canadian ambassadors own private residence.

Back in the US, President Carter, the State Department and eventually the CIA discuss the various bad options, ultimately choosing the least worst. Riding out on bicycles during winter is only dismissed at a late point, Mendez sarcastically suggesting that adding training wheels might help.

If the cover story is to hold up, the film is going to have to look real. Cue stage left, some Hollywood stereotypes John Chambers (John Goodman) and Lester Siegel (Alan Arkin). As Chambers summarizes, “You want to come to Hollywood and make a fake movie and do nothing”, when Mendez confirms, Chambers replies “You’ll fit right in!”.

Chambers and Siegel are tasked with making it appear like they are creating and producing a movie by generating buzz and column inches in “Variety”, the movie news bible. The whole charade even includes a read through in full costume and whilst somewhat amateurish, it clearly is the best option on offer.

When Mendez travels to Iran the situation becomes more serious for all concerned. Being caught with false documentation would label them spies, with a summary court apperance and execution. Understandably, the terrified hostages are not confident of their chances and doubt whether their trust in Mendez is well placed.

Affleck as both Director and lead actor has done a fine job. All characterizations are wholly believable, the period detail, costumes and obligatory beards and mustaches are all in place. The acting is first rate, natural and without any grandstanding, ordinary people very fearful their lives are about to come to a grisly, undignified end..

Back in the States, Jack O’Donnell (Brian Cranston) holds the operation together as best he can, as the political sands shift significantly beneath his feet. The stakes are very high, not only for those on the ground but Carter’s administration as well. The possibility of a humiliating capture during a covert approved CIA operation, on a political level is unthinkable. There is a palpable feeling of tension which is ratcheted up to almost unbearable levels. If you have finger nails going in, they make be somewhat lower by the credit roll.

Affleck is not afraid to provide a measured dignified performance, always important when relaying real life events. There are several quiet scenes and he allows the story to flow organically rather than forcing it along with exploding cars and unnecessary violence.

Finally, as a director he manages to heed the golden movie rule “politics do not sell”, neatly avoiding making any overtly political statement by providing a balanced view of the events. The how and why, without painting either side as complete saints or sinners.

With three solid well received films on his resume, Affleck has truly reinvented himself from “Bennifer” days and if he chooses, is likely to be helming very large film projects in the future.

An excellent period set drama/thriller with a fair sprinkling of black humour. The events depicted are difficult to believe but based on truth.

What is not difficult to believe, is Afflecks emergence as a star director in the making.