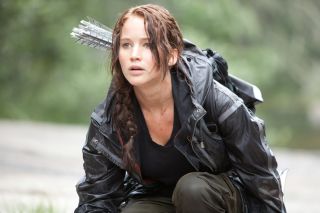 Taking into account the subject matter, a live entertainment TV death match between twenty four randomly chosen teens (Tributes), killing each other to leave one victor, this would present a challenge for any filmmaker.

Even writing this makes the whole premise sound wholly distasteful, unwatchable and at best exploitative. However, the film neatly sidesteps all of these issues and skews more adult in content and maturity, without leaving it’s younger fan-base behind. Director Gary Ross, actress Jennifer Lawrence and screenplay writers Collins and Billy Ray, all deserve credit for such an achievement.

We first meet Katniss Everdeen (Jennifer Lawrence) as she attempts to fend for herself and family, in drab dreary mining “District 12”. The districts exist within the nation of Panem, a post apocalyptic USA, ruled by a totalitarian styled Capitol. Within the Capitol, the 1% live very well indeed, all of their needs catered for by the various districts. Clearly in the past, these areas decided the division of labour unfair and revolted. War ensured but now peace reigns, only of course whilst the Capitol brutally represses the masses in the districts, whilst producing glossy ads showing how great their life is.

To remind the proletariat of their place, provide them with scraps of false hope and provide a distraction for the Capitol’s idle bored masses, an annual “Hunger Games” tournament is staged. Katniss offers herself as a “volunteer” to replace her previously chosen sister “Primrose” (Shields). Fortunately well versed in hunting and living in the woods, her trusty bow and arrow providing squirrels and the like for the family’s table, following the death of her miner father.

Entering the Capitol, the chosen children are treated like royalty, whilst their fate is all but preordained. Excruciating interviews are held to give each character depth, making their subsequent death more exciting to viewers. Sponsors can also help contestants during the games if they wish, with ointments and equipment. Stanley Tucci chewing every available piece of onstage scenery as the uber oily chat show host, Caeser Flickerman, along with his obsequious side kick, Claudius (Toby Jones).

The Capitol, a curious mixture of a dystopian future world albeit with characters dressed in Marie Antoinette style costume excesses, all presided over by the not so benevolent President Snow (Sutherland).

Katniss and her compatriot Peeta (Josh Hutcherson) from District 12 are mentored by a previous “winner” Haymitch Abernathy. Haymitch spends most of his life with a bottle, following his earlier survival traumas. Whether he is of much help is debatable, certainly more so than Effie Trinket (Elizabeth Banks), a splendid character bedecked in outrageous costumes, tottering heels and outfits that look like an explosion in a sweet wrapper factory.

To give to much away would be a spoiler, is there romance involved, well this is a teen film so you can answer this yourself. Lawrence anchors the film with another nuanced mature tom-boy performance, expect to see much more of her on the big screen. Harrelson and Lenny Kravitz both add to the film with notable scenes and Banks with a voice seemingly enhanced by helium, enhances the overall surreal feel at the Capitol.

If you are concerned about the violence, whilst the premise is strong the onscreen gore is minimal and expertly done to allow the lower certificate. Many films could learn a lesson from a less is more approach. Proving beyond doubt, what you don’t see, is far worse than what you can. There are many intense scenes but the overall tone is expertly handled.

There is much depth to the story if you choose to look, Ghetto style registration scenes, Nuremberg type rallies, totalitarian oppression beneath large symbols. A society at it’s pinnacle, ready to self combust from its own excess, the divide between “have and have not’s”. This is before you even consider the small step from our own reality shows, to death served as entertainment. Not so much Science Fiction, as a parable or wake up call to those who might listen.

Incidentally, “Panem et circenses,” summarizes the Roman formula for creating a docile population: Give them bread and circuses. No coincidence in naming the fictional nation, one assumes.

Faults, the story does take a while in set-up but provides later scenes with resonance, there is a lot of backstory to cover off. We see shadows of a pending love triangle (Liam Hemsworth) so beloved of teen fiction, also the subject matter however well handled, may not be to everyone’s taste.

Taking some $650 million at the box office on a $78 million budget, be prepared for more “Games” soon, certainly there is plenty more story to cover. If the sequels are of similar high standard, the “odds may ever be in their favour”.

Excellent, smart and thoughtful entertainment,  sure to promote two further sequels to cover the remaining books.

Intelligent mainstream film making, sure to please both the fan-base and many more besides