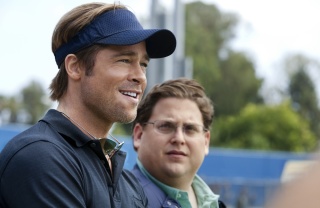 Realising that he is about to lose several key players, he asks management for more money but the pot is empty. Make do and mend is the advice, albeit pleasantly relayed. Baseball, like most pro-sports is all about money, if you have more, you can buy the better players, win more games, attract more fans, sponsorship and so on and so forth.

However, if you don’t have much money to spend, your options narrow quickly.

On a regular trip to the Cleveland Indians to trade players, Beane notices a youngster who appears to be dispensing wisdom but clearly is not cut from the same cloth as the usual talent scouts. Most of whom appear to pick players based on a random and highly subjective criteria, including if their girlfriends are hot.

Peter Brand (Jonah Hill), is a Yale educated Economics graduate who has developed and refined ideas put forward by Bill James and Craig Wright. Rather than looking at star power, players are evaluated on OBP (On Base Percentage) and Slugging Percentage. Because other teams are not utilising such a method, there were many “diamond in the rough” players that could be recruited cheaply. These players would theoretically play well, if assembled carefully in a team with the other required attributes.

A team built by a computer based on statistics if you will.

Testing Brand out by asking whether Beane himself would have been picked in the draft when younger, the honest response confirms the hire of the young man with the radical ideas.

Understandably this new approach does not endear Beane to the existing talent scouts. Initially, the theory is stretched to breaking point as the team fares badly. Will Management keep the faith and will Beane have the strength to see his vision out and change Baseball for ever?

Time will tell and none of the above are spoilers, this is a fact based film and all of the information, results etc are well known to any fan with even a passing interest in the subject.

If the story sounds a bit dry, well known screenwriters Stephen Zaillian and Aaron Sorkin have managed to craft an exciting, engaging and ultimately very human tale. The story has plenty of great scenes, an Oscar nominated performance from Pitt, coupled with excellent and extensive period detail, assisted and aided by direct help from the Professional Baseball tour.

Pitt is not alone, he has sterling support from Philip Seymour Hoffman as the Oakland’s long suffering coach, Robin Wright as his ex-wife and Jonah Hill who surprises, with a Oscar worthy nuanced performance.

The story flows very well and we experience the highs and lows that only professional sport can demonstrate so well. The scene where Brand is taught how to provide bad news feels realistic, as is the players response to the news. There is enough humour to lighten the mood and certainly knowledge of baseball is really not required.

Beane’s relationship with his daughter and ex-wife are also realistically sketched. The whole enterprise by Director Bennett Miller has been handled with love and care, in keeping with a sport that still manages to maintain a romanticized place in the hearts of many.

The film uses real locations where possible, dressed to resemble the correct time period. The dressing rooms are sets but are meticulously created to replicate the facilities, uniforms and equipment of the time.

The film credits list extensive “effects” which are hard to spot, as the real and archival action are merged seamlessly, to create a very believable period set whole.

An excellent sports film which like the best in the genre is not really about sport at all, merely using the structure as a metaphor for life itself.

All round excellent performances, led by an exceptionally naturalistic performance from Pitt who has arguably never been better.