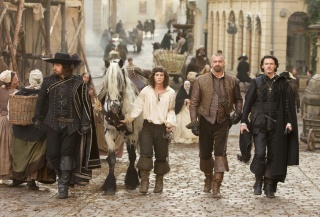 That sound you hear is author Alexandre Dumas slowly rotating in his eternal resting place, such is the extensive re-imagining of his original novel. Director Paul Anderson retaining the name and characters but little else of the original story.

The trio meanwhile occupy themselves by getting drunk, eating and chasing the occasional French Maid. Meanwhile young D’Artagnan (Logan Lerman) dreams of becoming a Musketeer, leaving his bucolic rural based family for the den of inequity that is Paris.

D’Artagnan manages to rub everyone up the wrong way, challenging people to a duel every second stride. Having initially narrowly missing a skewering by the leader of Richelieu’s guard, Captain Rocheford (Mads Mikkelsen), D’Artagnan arranges to then duel all three Musketeers individually for minor infractions.

Before you can say, just kill the cocky annoying little bugger and be done with it, more of Richelieu’s guards turn up. This enables our quartet to join forces and engage in some PG rated swash buckling, with more never ending bad guys to be cut down, than a Call of Duty video game.

Once the film establishes that the quartet can do what they like, kill lots of guards and seemingly be rewarded for their efforts, the film reveals the courtly machinations of Cardinal Richelieu. This involves using Lord Buckinghamshire (Bloom) to provoke a war with England and more double crosses than a John Le Carre novel.

Waltz as ever plays the bad guy to the hilt, Bloom looks uncomfortable which is understandable because no-one gets a chance to actually act. On occasion they do try but all concerned give performances appropriate for very large and expensive school play. Pantomime buffoonery is obviously the directors chosen approach, lob in a few CGI airships and voila, the film is a colourful mess. Interestingly, has there ever been a decent film that employs airships, Pixar’s “Up” being an exception.

Most of the blame must surely lie with the directors lack of confidence in the material, the start is ok and young D’Artagnan apart, character interaction is reasonable and despite the early critical mauling the film received, you think maybe it’s not so bad. Then, as if everyone believed that this would never be enough, the director abandons all pretence of reality and heads off into “CGI Green Screen” hell, where little or no acting is expected or possible.

Lerman decides to play his character as American as a hotdog and when the inevitable love interest appears, the admittedly pretty young Queens maid, she could not appear more American if “Apple Pie” was written on both arms, is this story at least nominally set in France?

Interesting note, Bavaria in Germany stands in quite effectively for Versailles and the village set scenes. Only in the movies would we have, Americans attempting to be French, whilst filming in Germany.

Whilst there is some minor fun to be had, with the talent and money on display, this could and should have been so much more. Whilst a sequel is obviously set up in the closing credits, there may be more honour for all concerned to merely say Adieu.

A disappointing albeit colourful romp, using the characters Alexandre Dumas created merely as a starting point for a sub standard “Raiders” style adventure. Add in a measure of any swash buckling movie ever seen, all generously mixed with an early Elizabethan Episode of “Black Adder” and you get the general idea.

Largely to be avoided unless airships quite literally float your boat.