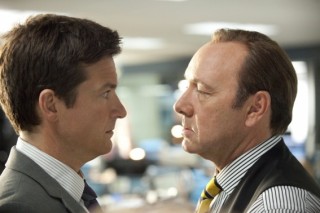 Some of us have bosses we don’t get on with, it goes with the territory, sometimes it’s hard to like the people who tell you what to do.

Nick (Jason Bateman) hates his boss Dave Harken (Spacey), who criticizes him for being two minutes late and accuses him of a drink problem, after he has plied him with Scotch at 8:00am.

Finally, we have Kurt (Buck) who loved his job until his benevolent employer (Sutherland) drops dead leaving his coke addled loser son in charge, an unrecognizable Colin Farrell.

Instead of sucking it up, the trio decide over beers at a bar, that enough is enough, the bosses life expectancy needs to be de-emphasized. Not possessing the necessary homicidal skills they employ a “murder consultant” (Jamie Foxx), to complete their dirty work for them and get their bosses “whacked”.

The premise is good and we have some significant talent on display, so does this comedy have what it takes to kill you?

A comedy needs laughs and we do get some chuckles but the tone is very uneven and none of the characters are believable or acts in the manner you might expect. The “A” list cameos add some spice but largely the opportunities for real belly laughs due to the farcical situations in which the trio find themselves, are criminally wasted.

Dale is designated as a “Child sex offender”, albeit somewhat falsely accused, this sloppy plot device ensures he cannot leave his employment. Why not just place him in a job where he cannot use his skills elsewhere, rather than this bizarre trait, which will instantly turn audiences off.

There are some funny lines, including why drag racing in a Prius is a bad idea and why it is difficult to put cocaine back in a box. The trio do their best with a weak script and improbable situations but on occasion their commitment is lacking and there is a feeling of “phoning it in”.

With a box office take of over $200 million this is yet another example of a very weak “comedy” performing well at the box office. Expect more movies with modest budgets, great trailers and yet disappointing films at a multiplex near you soon.

Despite an interesting set up and major talent available, this is disappointing and lacks real laughs to pull the story through.

A middling comedy with a lackluster script, you can certainly do better for your comedy dollar.