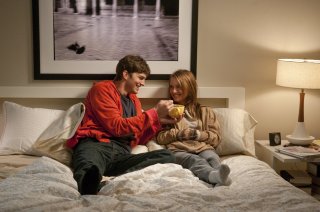 We meet the young friends at a party when everyone is pairing off, Emma (Portman) and Adam (Kutcher) are not together, just friends despite the ill judged, both story and script wise, vulgar comment from Adam.

We spiral through a few years with the pair meeting again and then again and so forth. At no point does the relationship change until, well it does. Friends no more and now, if not lovers, then “Friends With Benefits” (not to be confused with film of the same name) or “Bed Buddies”.

The crux of the story is, can you have a sexual relationship with regular meetings, whenever the mood strikes, without that pesky love thing and petty jealousies getting in the way. In real life this may be more complicated to answer but in the movies, the answer to provide a three act story, is that you cannot.

Adam is an assistant on what appears to be a “Glee” wannabe TV show. He is desperate to write but with little opportunity to do so, whilst he remains in the long shadow of his father “Alvin” (Kline), a much loved TV show character with his own annoying catchphrase. Dad is aging disgracefully and when he starts recycling, not paper but his sons girlfriends, their relationship understandably takes a hit.

Meanwhile Emma, so buttoned up she actually does not have any buttons just in case, is the emotionally barren daughter of a equally frosty mother. Emma is a rather improbable busy hospital doctor with the obligatory movie gay friend mixing it up with her two girl flatmates, the four providing great comedic possibilities that are not really explored.

There is little chemistry between the main pairing, neither are terrible but Portman is not on top form and Kutcher seemingly plays a facsimile of the real Ashton Kutcher yet again. Lake Bell as “Lucy”, admiring Adam from not so far, is more amusing. Striking a note just a restraining order’s width away from stalker and with the awkwardness to match when presented with her prey.

Kline looks like he is enjoying himself but this is very lightweight film that still manages to strike the odd bum note in tone. Whatever happened to chaste comedies like “When Harry Met Sally” and “Youv’e got Mail”, do we really need to know someone is putting on a condom?

Perhaps a comedy where both parents are not rich, with expensive weddings and lives might strike more of a note with cinema-goers. It remains to be seen if the more recent “Friends with Benefits” strikes a better balance in tone. Certainly in this film you may find your female partner shouting, “just what do you want lady?”, as the film draws to a close.

Not without some merit but overall, a middle of the road Rom Com with the emphasis on comedy rather providing any insight on the subject matter or any real life situations.