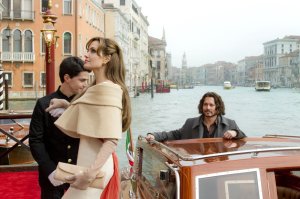 How could any film fail with these attributes?

Jolie is Elise, the mysterious lover of the unseen Alexander Pearce, a thief who has stolen billions not only from the British Inland Revenue but also a pseudo Russian Mafia boss, the reliably typecast Stephen Berkoff. Clearly not knowing which adversary is more dangerous, Pearce is in hiding, a master of disguise.

Enter stage left, a moderately willing decoy in the shape of unkempt, innocent American math teacher, Frank (Depp). Elise befriends him on the train to throw off an army of Scotland Yard watchers who follow her every move and morning Latte. Inspector Acheson (Bettany) and Jones (Dalton), ensure the surveillance budget is well spent, Acheson in particular appears particularly obsessed with the case.

Docking in Venice the couple stay at the finest hotels and eat at the most expensive restaurants. The idyllic existence only broken when random baddies start attempting to kill Frank at every opportunity. We are spared James Bond style Gondalo chases but a Venice speed boat does not fare well in one reasonably well executed action scene.

There is little chemistry between the A-List screen couple and the tone of the film is very variable, presenting as a comedy in places, yet with earnest declarations of undying love the next. Perhaps this film confirms that you cannot truly make a terrible movie with good actors on board, despite all of the above.

There are a few twists and turns, nothing to trouble an undemanding audience and the film moves towards a rather weak denouement. Neither actor is required to act, Jolie appearing to be used more as a clothes horse for various costume changes, rather than displaying her thespian talents. Depp is clearly enjoying some time off, although he flirts dangerously close to a Jack Sparrow like running escape at one point.

The film might be described as a light thriller with comedic overtones, occasionally these are intentional and some, not so much. The first declaration of love comes so far out of left field as to require a quick rewind just to confirm it was muttered.

Directed by the splendidly titled Florian Heneckel von Donnersmark, this is a rather cold film that largely squanders the talent and budget in evidence. A director with a lighter touch might have made a modern “Breakfast at Tiffany’s”, Donnersmark serves up “Breakfast at Denny’s”, which is adequate but not worth remembering by mid morning.

Not as bad as you might have feared but despite a promising first start, rather average over all.

Fans of both actors or Venice, will still marvel at all the glamour on display, anyone else may find better uses for their time.