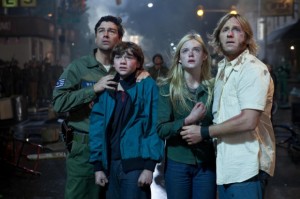 Whilst nighttime filming at the local railway station, a pick up truck unexpectedly drives down the track into the path of an oncoming train.

No ordinary train but a Airforce locomotive carrying something they would rather no-one gets to see. By the time the colossal, spectacular and very long explosion subsides, there is not much left, apart from a still running camera and plenty of terrified children.

What emerges from the train is the point of the movie, so no spoilers here. Just think small time town, mild horror and the local police deputy doing his best to keep the town safe and calm, sound familiar?

It should, within moments most audiences will recognize the influence of Spielberg who produced this J.J. Abraham’s (Star Trek) directed film. The period detail, children in distress, extensive use of sound effects to signpost incoming danger, you would be hard pressed to miss the references.

This is not a criticism, early Spielberg films were massively popular and with the added benefit of state of the art effects, this takes the original concept and if anything improves on what came before.

Joe’s father (Chandler) is the deputy in question, at odds with his neighbour and father of Alice. This follows the death of his wife at the steel mill, which is neatly sketched out in the opening scene, broken families being another early Spielberg trademark.

The children are good, acting naturally and the dialogue is believable. In between effects there are some well drawn quiet character driven scenes, notably the practice scene before the crash and when Joe carefully turns Alice into a Zombie with his homemade make up kit. Proof that you can care about characters in between exploding tanks & trains. The period setting is great, with ELO and other topical bands punctuating the soundtrack.

There is a stand out sequence aboard a bus which is classic “Jurassic Park” and together with a electrical pole repair scene, almost cries out for a John Williams penned music score. Abraham’s wisely keeps his creature hidden for most of the film and yet shows creativity when finally the reveal is made. The writers also manage a satisfactory ending, just when you start to wonder how this will all turn out.

Initial trailers indicated a monster movie with subsequent clips revealing the film skewed much younger, focusing on it’s young protagonists. The finished film achieves both, enough jump scares and peril coupled with a well sketched coming of age story. Joel Courtney is a good find, carefully showing wonder, terror and an inner resolve whilst facing an even greater terror, talking to Alice, the girl he fancies. Ellen Fanning showing her sister Dakota did not steal all the acting genes.

Make sure you stay for the credits where the fruits of all that amateur filming are shown in all their glory. Always fascinating to see actors acting badly, which is good acting in itself.

If you are looking for a summary, think Jurassic Park crossed with ET and the Goonies, which are all good references.

Add some fine child performances, lots of explosions and scares for older children and you have an easy recommendation, go see it.