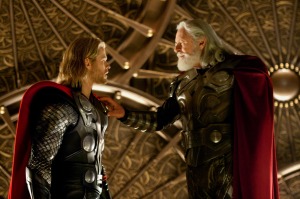 Marvel has rummaged in it’s cupboard full of superheroes and dusted off another lesser known character, “Thor” the Norse superbeing with colossal powers party attributed to his trusty Hammer “Mjollnir“.

The film opens with a neat car versus person interface, followed by some witty oneliners from Rick (Skellan Skaarsgard), Darcy (Kat Dennings) and Jane (Natalie Portman). The three offbeat scientists, discovering Thor (Chris Hemsworth) by accident, following a tornado like weather event. The story then backtracks to find out where the stranger arrived from, surely he cannot just fall out of the sky?

An extended period of exposition details the other world struggle between two fantastical realms lead by King Odin (Anthony Hopkins) in Asgard and the Bi Frost people lead by the very cold, in every sense, King Laufey (Colm Feore). Despite being groomed to be King, Thor is reckless, arrogant and keen to fight at any and every opportunity. Loki (Tom Hiddleston) has always played second fiddle to his brother and without a cool hammer to his name, stays firmly in the background.

Events transpire that cause the wise King to excommunicate his chosen son to earth, stripped of his powers and only able to use the hammer, sent with him, if he becomes worthy.

Returning the story to Earth, the scientists find the newly arrived impostor entertaining but weird, speaking in a strange “old English” accent and smashing cups on the floor when another drink is required, all standard Norse superbeing type behaviour. These classic fish out of water scenes, are the strongest part of the film. Portman is new to the comic book universe but does well with the limited screen time available. Hemsworth is surprisingly good, buff, entertaining and more than willing to make fun of himself, essential attributes in any comic book film adaptation.

Of course on earth S.H.I.E.L.D gets involved, any opportunity for men in black suits, sunglasses and black vans is never missed. Marvel, as most readers will know, are attempting to tie all the characters together for the upcoming Marvel “Avengers” movie, to maximize the synergy (i.e. Comic book geek fanbase) that exists between all the characters.

Cutting between the real world and Asgar, it is clear that Loki with only a rather boring staff to his name, will make mischief whilst his brother is away. Anthony Hopkins as Odin, is the Anthony Hopkins we know and mostly love to watch, although his wife “Frigg” (Rene Russo) all but ending up on the cutting room floor.

There are many sweeping CGI shots of gleaming cities, large scale battles with the Bi Frost people, think deep freezers in human form. Monstrous beasts awakened and slain in short order, whilst trusty watchman Heimdall (Idris Elba) guards the bridge to other dimensions. Unfortunately, Lord of The Rings has done many of these sequences better and with more gravitas. Thor’s comrades at arms are essentially the Fellowship in barely disguised form and on occasion, the huge sites, throne rooms, outfits with elaborate shoulder pads and capes, are difficult to accept with a straight face.

The stand out sequence in the small town between the “Destroyer” and the merry band is entertaining, as the medieval knight like automaton, dispatches obstacles in it’s path with a rather nifty heat lamp hidden behind it’s mask.

The film, bizarrely although competently directed by Kenneth Branagh is wise enough to laugh at itself and puncture the pompous nature of this mythical tale at every opportunity. More focus on the actors and their interaction, with less cityscape CGI would make for a better film but this is certainly not as bad as you might have feared.

Clearly the producers are looking ahead with an ending begging for a continuation. Box office suggests that audiences have room for yet another superhero. Why such stories should be so popular in these straitened times may not be so hard to ascertain.

Yet another comic book character to get to know, whilst fun and self knowing enough, the extended CGI sequences on occasion ruin the good work on offer when the characters are earthbound.