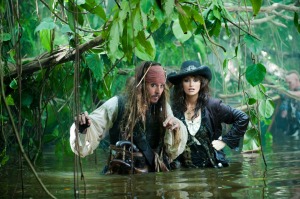 Following the colossal success of the first three films, it will surprise no one that Disney would wish to unfurl the sails for another adventure, with everyone’s favourite pirate Captain Jack Sparrow (Depp) back on board.

Parts one and two were fun, three took a turn for the surreal and lost it’s way almost entirely, so where does number four stand in the “Canon” – near pun intended.

This episode is back in the real world, or whatever passes for the real world in the series. Jack is chasing the Fountain of youth with Captain Barborossa (Rush) and Captain Blackbeard (McShane), either on on his side or attempting to kill him through the long running time. The “Spanish” also provide a competing rival bid, inserted in the plot to add a sense of urgency to the task. Various eclectic items are required, silver chalice’s, maps, mermaids tears, the usual household items, before the quest can be fulfilled.

Having ditched both Orlando Bloom and Keira Knightly, new blood is needed and found in the shapely form of Penelope Cruz as Blackbeard’s daughter, possibly, nothing being what it seems, the plot being largely irrelevant anyway.

After a rousing, albeit preposterous, well staged escape onto the streets of London, we finally get to sea with some fine ship work. This anchors the film where we should be, on the high seas with pirates and stereotypical pirate talk, timbers shivering and casual acts of PG friendly sadism.

Almost pantomime levels of acting and dandifying are much in evidence, Sparrow always was somewhat ridiculous and here all but achieves a caricature of a caricature. Depp is clearly still having fun but the act is wearing thin and the addition of Philip (Claflin) as a missionary, yes that joke will get used, with Syrena (Berges-Frisbey) as a mermaid, adding fresh faced interest to the story, incidentally both acting better than anyone on display here.

Watch out for a heaving bosom cameo from acting royalty, followed by aging rock n’ roll god, clearly everyone wanted to be part of the fun.

However, whilst the tone is consistent there is no real emotional heft to any of the scenes and with no real peril on offer, it is difficult to care about about characters, who appear able to die and be reborn throughout the series as and when required.

The film is artistically unnecessary, advancing the series in no way other than reinvigorating a highly profitable franchise. Without doubt an exercise in box office returns but in many ways, better and certainly longer than you might have feared.

With an ending that indicates that the producers clearly feel there is more they can squeeze from the series, be warned the Black Pearl will be back, if anyone can figure how to release it from the bottle safely.