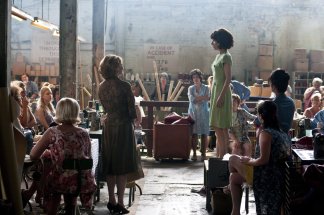 At a Ford factory in Dagenham (UK) 1968, a group of female seamstresses set a chain of events in motion that would have a profound effect on the modern workplace.

It may appear largely nonsensical now but women were not paid the same as men, even if carrying out exactly the same tasks. Some might argue times have not changed that much but legally they have, equality in pay has been on the statute books for some time in most developed countries.

Of course, Rita O’Grady (Sally Hawkins) was not thinking in such global terms, she and her fellow workers were fed up getting poorly paid, due to a spurious regrading of their skills to a “non skilled” rate. Ironic, bearing in mind they are required to patch together car seat fabrics with no template or instructions detailing how to do so.

This was a time when Union shop stewards called the shots and management and Union officials had never been further apart, agreeing only to disagree in a series of highly damaging strikes.

The women had always resisted striking, clearly they were already hot under the collar as they performed their work in their undies, there being no air con available. Albert the kindly shop steward (Hoskins), remembering to avert his eyes whenever he comes to talk to the ladies.

Reluctantly, O’Grady gets involved due to her friend Connie (Geraldine James) family issues, at which point a star is born. O’Grady asks simple questions and when she does not receive simple answers, just keeps asking. Much to the chagrin of the Union negotiator, who seems more interested in Union reimbursed “Bernie” meals, than securing any advantageous deals for his union members.

The ending is not in doubt, refer to current employment law for details, however the journey is worth taking. Hawkins is both vulnerable, offended, demure and dogged in her pursuit of what seems right, mostly ably supported by her kindly sad sack of a husband Brian (Mays). Brian, a handy motion picture caricature, meant to represent all hopeless 60’s men, unable to cook, wash or look after the kids. O’Gradys response to his desire for praise is also telling, not drinking too much, not hitting his partner and not womanizing, is that where minimum bar should be set?

Miranda Richardson steps not far from her comedic Blackadder Queenie role, to play another domineering woman, Barbara Castle. A noted and formidable female politician at the time, Richardson now with typecasting she may never live down.

The film is more drama/comedy rather than the reverse and those looking for lashings of knockabout humour may be disappointed, the story skewing more serious than trailers might suggest. This after all, is a serious subject deserving of serious treatment. Director Nigel Cole also directed “Calendar Girls”, a similar film with real events depicted in a real way with a light dusting of movie magic.

Rosalind Pike stands out as a frustrated wife of a Ford Executive, her declaration of who she really is, is great to watch. Richard Schiff (of West Wing fame) has the thankless task of making US senior management, if not likable at least not monsters, this he achieves admirably.

Budget constraints are obvious but do not detract from the film, the period detail is adequate for the story and whilst the story is old fashioned in the telling, this perhaps suits such a film.

The message received is loud and clear. Life may not be perfect now but in comparison to the accepted mores, roles and unquestioned sexism that existed before, we are light years apart.

Dependent on the audience there maybe laughter, anger and tears in equal measure, for the other 51% there is much to enjoy.

A thoroughly likable film, not as humorous and freewheeling as you might be expecting but a well produced slice of 60’s life, the humour growing organically from the believable situations the characters find themselves in.