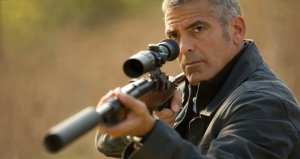 George Clooney tends to spend his onscreen time in both big budget and indie fare, here we are most definitely in Indie country.

Jack/Edward (Clooney) is a cold blooded contract killer dispatching his victims whilst seemingly carrying no emotional baggage. We know this because we briefly see him in action on a frozen lake in Sweden, cold in every sense of the word.

Realising he needs to lie low for a while, at the suggestion of his handler Pavel (Leysen), he decides a remote Italian village is an ideal location. Interestingly he actually settles in another village, indicating his constant level of paranoia.

This is well justified, as bad people have a habit of finding him. Leading to a Vespa/car race that represents one of the few action sequences in the film, even this is short and not overly dramatic.

This is a very languid film, we know Clooney can act and he does well here with many telling small gestures and mannerisms but there is very little going on. A sliver of excitement arrives when he is tasked with a request to provide a specific weapon for another killer.

In these enjoyable scenes, it is obvious he is highly skilled and the recipient of the weapon Mathilda (Reuten) certainly acts the part. There is some pleasure to be had from their methodical preparations, similar to the much older “Day of the Jackal”.

Jake/Edwards relationship with his paid companion Clara (Placido) and the local priest are minor diversions but overall this is this is a very slight tale albeit with a reasonable ending.

However, it is difficult to know what director Corbijin desires from his audience, sympathy is unlikely, certainly this is no thriller nor is it a love story as such. Suspense is minimal, despite the occasional jump scare. Perhaps a meditation on a life and what has been achieved and so forth, which in this case is killing lots of people, which obviously limits one’s ability to build a fulfilling private and social life.

Slow films can be interesting but usually they have a destination in mind, here it appears the director has little to say or add. Twenty seconds of film time showing the opening and closing of an electric door can have huge significance, here it is just a door opening and closing.

Contract killers finally realising their lives are empty and filled with remorse wanting out, is hardly a new plot angle and has been done before better. The attempts to shorten his stay by the “Swedes” are almost comical in nature, many opportunities exist without resorting to skulking around like bad 70’s Euro thriller wannabees.

Based on the book “A Very Private Gentleman” by Martin Booth.

Glacially slow and despite some good work by the cast and solid direction, rather an empty film and difficult to recommend to anyone not in the Clooney fan club.

The film leaves the audience with a feeling of “what was that all about”, a feeling not likely to have them queuing round the block for tickets.